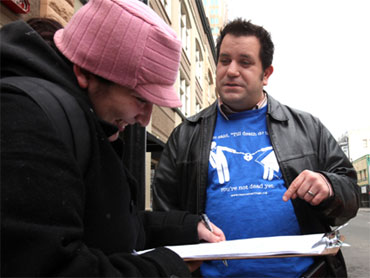 Til death do us part? The vow would really hold true in California if a Sacramento Web designer gets his way.

In a movement that seems ripped from the pages of Comedy Channel writers, John Marcotte wants to put a measure on the ballot next year to ban divorce in California.

The effort is meant to be a satirical statement after California voters outlawed gay marriage in 2008, largely on the argument that a ban is needed to protect the sanctity of traditional marriage. If that's the case, then Marcotte reasons voters should have no problem banning divorce.

Marcotte said he has collected dozens of signatures, including one from his wife of seven years. The initiative's Facebook fans have swelled to more than 11,000. Volunteers that include gay activists and members of a local comedy troupe have signed on to help.

Marcotte is looking into whether he can gather signatures online, as proponents are doing for another proposed 2010 initiative to repeal the gay marriage ban. But the odds are stacked against a campaign funded primarily by the sale of $12 T-shirts featuring bride and groom stick figures chained at the wrists.

Marcotte needs 694,354 valid signatures by March 22, a high hurdle in a state where the typical petition drive costs millions of dollars. Even if his proposed constitutional amendment made next year's ballot, it's not clear how voters would react.

Nationwide, about half of all marriages end in divorce.

Not surprisingly, Marcotte's campaign to make divorce in California illegal has divided those involved in last year's campaign for and against Proposition 8.

As much as everyone would like to see fewer divorces, making it illegal would be "impractical," said Ron Prentice, the executive director of the California Family Council who led a coalition of religious and conservative groups to qualify Proposition 8.

No other state bans divorce, and only a few countries, including the Philippines and Malta, do. The Roman Catholic Church also prohibits divorce but allows annulments. The California proposal would amend the state constitution to eliminate the ability of married couples to get divorced while allowing married couples to seek an annulment.

Prentice said proponents of traditional marriage only seek to strengthen the one man-one woman union.

"That's where our intention begins and ends," he said.

Jeffrey Taylor, a spokesman for Restore Equality 2010, a coalition of same-sex marriage activists seeking to repeal Proposition 8, said the coalition supports Marcotte's message but has no plans to join forces with him.

"We find it quite hilarious," Taylor said of the initiative.

Marcotte, who runs the comedy site BadMouth.net in his spare time, said he has received support from across the political spectrum. In addition to encouragement from gay marriage advocates, he has been interviewed by American Family Association, a Mississippi-based organization that contributed to last year's Yes on 8 campaign.

He was mentioned by Keith Olbermann on MSNBC's "Countdown" during his "World's Best Persons" segment for giving supporters of Proposition 8 their "comeuppance in California."

Marcotte, who is Catholic and voted against Proposition 8, views himself as an accidental activist. A registered Democrat, he led a "ban divorce" rally recently at the state Capitol in Sacramento to launch his effort and was pleasantly surprised at the turnout. About 50 people showed up, some holding signs that read, "You too can vote to take away civil rights from someone."

Marcotte stopped dozens of people during another signature drive in downtown Sacramento. Among them was Ryan Platt, 32, who said he signed the petition in support of his lesbian sister, even though he thinks it would be overturned if voters approved it.

"Even if by some miracle this did pass, it would never stand up to the federal government," Platt said. "And if it did, there's something really wrong with America."

Other petition signers said they were motivated by a sincere interest to preserve marriages. One was Ervin Hulton, a 47-year-old dishwasher who said he believes in making it harder for couples to separate.

"The way I feel, why go out and spend all these tons of money for marriage, the photography and all that? And along down the line, it's going to shatter," said Hulton, who is single.

The U.S. divorce rate is 47.9 percent, according to data provided by the National Center for Health Statistics reports. That figure, however, does not include California, Georgia, Hawaii, Indiana, Louisiana and Minnesota because those six states no longer report their divorce rates to the center.

California stopped because of budget problems, said Ralph Montano, a spokesman for the California Department of Public Health.

While most people would not support banning divorce, it does make sense for couples to be educated about the financial and emotional commitments of marriage, said Dan Couvrette, chief executive and publisher of Toronto-based Divorce Magazine. The publication has a circulation of 140,000, including a regional edition in Southern California.

"It's a worthwhile conversation to have," said Couvrette, who started the magazine in 1996 after going through his own divorce. "I don't think it's just a frivolous thought."