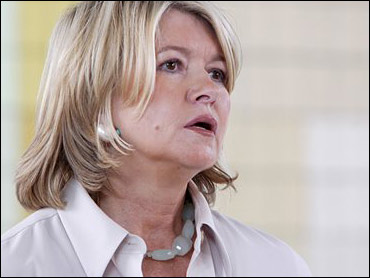 "Mark and I have always admired her," Trump said. "She's a very brave woman. She's built a multimillion-dollar empire. It was an easy decision. We think this will be an absolutely tremendous success."

Burnett didn't reveal many details about the new version of the business-themed reality show, such as whether there will be a boardroom or when the show would begin taping.

But Stewart's take on "Apprentice" should be distinct, Burnett said. "Martha has her own empire, which has a different look and feel," he said.

Her show will film in either New York or Connecticut, where the Martha Stewart Living Omnimedia Inc. empire is located. Sixteen to 18 contestants will vie for a one-year job with her company and $250,000 salary.

Casting has already begun. Producers currently seeking applicants for the fourth edition of Trump's "Apprentice" will also search for Martha wannabes. And a graphic with Stewart's face touting "Apply now to be Martha Stewart's Apprentice!" has already sprung up on NBC's Web site.

Since Stewart is not allowed to conduct business while in prison, Burnett made it clear his deal with Stewart was completed before the domestic mogul entered prison — although he's made monthly visits to her.

She was convicted last year of lying about why she unloaded shares of ImClone Systems Inc. stock in 2001, just before the price plunged. Stewart began serving her five-month sentence in October, and is scheduled for release in early March from a prison in Alderson, W.Va.

"Since the last four months, Martha's been incarcerated and has given no input," said Burnett.

Wednesday's announcement means Stewart will have two shows. On Dec. 8 it was announced that she will revive her daily homemaking show next September, this time with a live audience, celebrity guests and with Burnett's help.

Filming on her "Apprentice" could begin as early as March when Stewart goes from prison to house arrest. Under her probation, she'll be allowed to work outside of her home, which Burnett said may include shooting the show.

Other moguls have attempted to walk in Trump's reality TV show shoes — such as Dallas Mavericks owner Mark Cuban and Virgin owner Richard Branson, who starred in "Apprentice"-like shows. But both garnered low ratings.

Trump, who will stay in the boardroom for "Apprentice" seasons four and five, is ready to guide Stewart to success.

"With Branson and Cuban, I wanted them to fail," said Trump. "Fortunately, they did. Martha are I are teammates."

But just how far will the team mentality go?

Will Trump appear on her show or vice versa? Maybe, he said.

And will Stewart recite Trump's infamous phrase "you're fired" before eliminating contestants?

"She's probably going to use a different expression," said Trump.