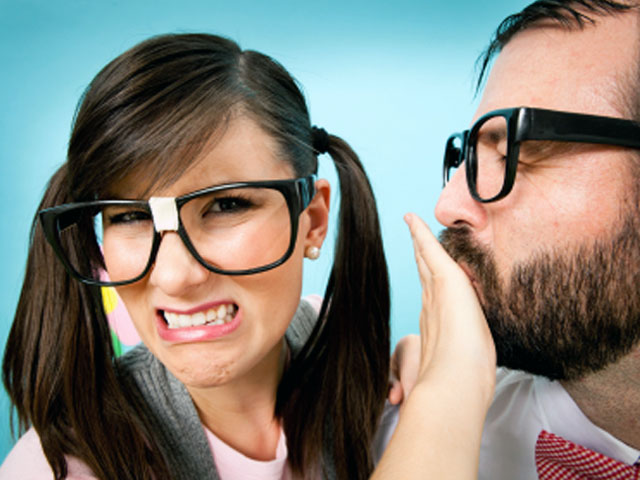 Don't let bad breath get in the way of your Valentine's Day.

Following a meal loaded with garlic or onions, bad breath can be an inconvenience. According to the American Dental Association, those who have a stinky mouth may be risking more than grossing out their partner.

Dr. Matthew Messina, consumer advisor for the ADA, explains that bad breath is caused by bacteria that live in the mouth and just by existing, can release odors. The bacteria live on teeth's surfaces, between teeth or on top of the tongue.

That means if you reach for mouthwash or a mint before the big Valentine's Day date you're not addressing the root cause of bad breath, and only masking it temporarily, he told CBSNews.com.

"The mints and the mouthwash won't get rid of the bacteria," according to Messina, who has offices in Cleveland. "That's why brushing flossing, and scraping the tongue are so important."

Other bad breath triggers include coffee, red wine and cigarettes. That's not just because these items are inherently smelly, he explained, but rather they stain the teeth, causing more bacteria and smelly scents to physically stick around the teeth longer.

For those of us who experience morning breath, that's caused by decreases in saliva production that occur when sleeping, because the saliva does not wash away some of the bacteria stuck in or around teeth.

Conventional advice is to brush your teeth twice per day -- once in the morning and before bed -- but Messina argues it's not the number of times you brush but how well you brush that's important. He said people should do a thorough cleaning of their teeth and gums at least once per day, complete with flossing -- about three minutes worth of intense dental care. If you just wave a tooth brush quickly over your teeth after eating something smelly, you're not getting a complete cleaning, he warned.

While bad breath can caused by foods and other triggers, people who have it all the time regardless of what they eat or how well they brush could have a more serious problem.

"Malignant" bad breath, or halitosis, can be a sign of periodontal (gum) disease that is eating away at bone around the teeth, he said. Other causes of bad breath may be underlying medical conditions, including acid reflux, , a sinus or lung infection, liver or kidney disease or uncontrolled diabetes (which causes a fruity odor, according to the National Institutes of Health). Visit a dentist if you have bad breath, because a dentist can give suggestions specific to your case or let you know if you should see a doctor.

While ruining the moment with a stinky kiss is a concern on Valentine's Day, Messina adds that the physical act of kissing or can transmit bacteria that cause gum disease to a partner.

That's why it's so important to brush and floss thoroughly, he emphasized.

"That's just being kind to the person you're kissing," said Messina.