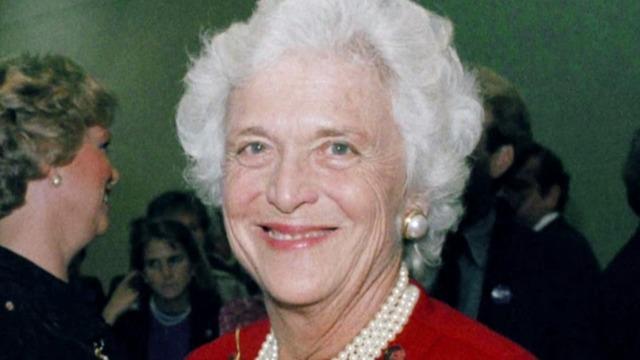 HOUSTON — A spray of flowers covered the closed silver casket of former first lady Barbara Bush in the sanctuary of a Houston church as hundreds of mourners began arriving Friday to pay their final respects.

Lucy Orlando was one of the more than 100 people in line 90 minutes before bus service began, travelling from Weston, Florida, to pay her respects. Originally from Haiti, the 74-year-old Orlando said has admired Barbara Bush for many years, including her work in promoting literacy.

"She was a very sweet lady and she loves people," said Orlando, who was carrying a gray suitcase containing framed photos of the couple and members of their family, including former Florida Gov. Jeb Bush and former President George W. Bush and his wife, Laura.

Jessica Queener, who works in special education and wears a cochlear implant to help with hearing loss, said Barbara Bush's work in education and helping people with disabilities "really resonates with me on a personal level but also professionally." Queener was in Houston from Washington, D.C., with her husband for work, and they decided to attend events honoring the former first lady, whom Queener also credits for being a positive influence on her husband when he signed the Americans with Disabilities Act in 1990.

A hearse containing the former first lady's casket arrived before daybreak at the Houston church, which is the nation's largest Episcopal church. Her body was to be in repose from noon until midnight. Among the officials allowed in earlier were the Senate's majority whip, Texas Sen. John Cornyn, and Housing and Urban Development Secretary Ben Carson.

An invitation-only funeral is set for Saturday. She will be buried later in the day behind her husband's presidential library at Texas A&M University in a gated plot surrounded by trees and near a creek where the couple's 3-year-old daughter, Robin, is buried. She died of leukemia in 1953.