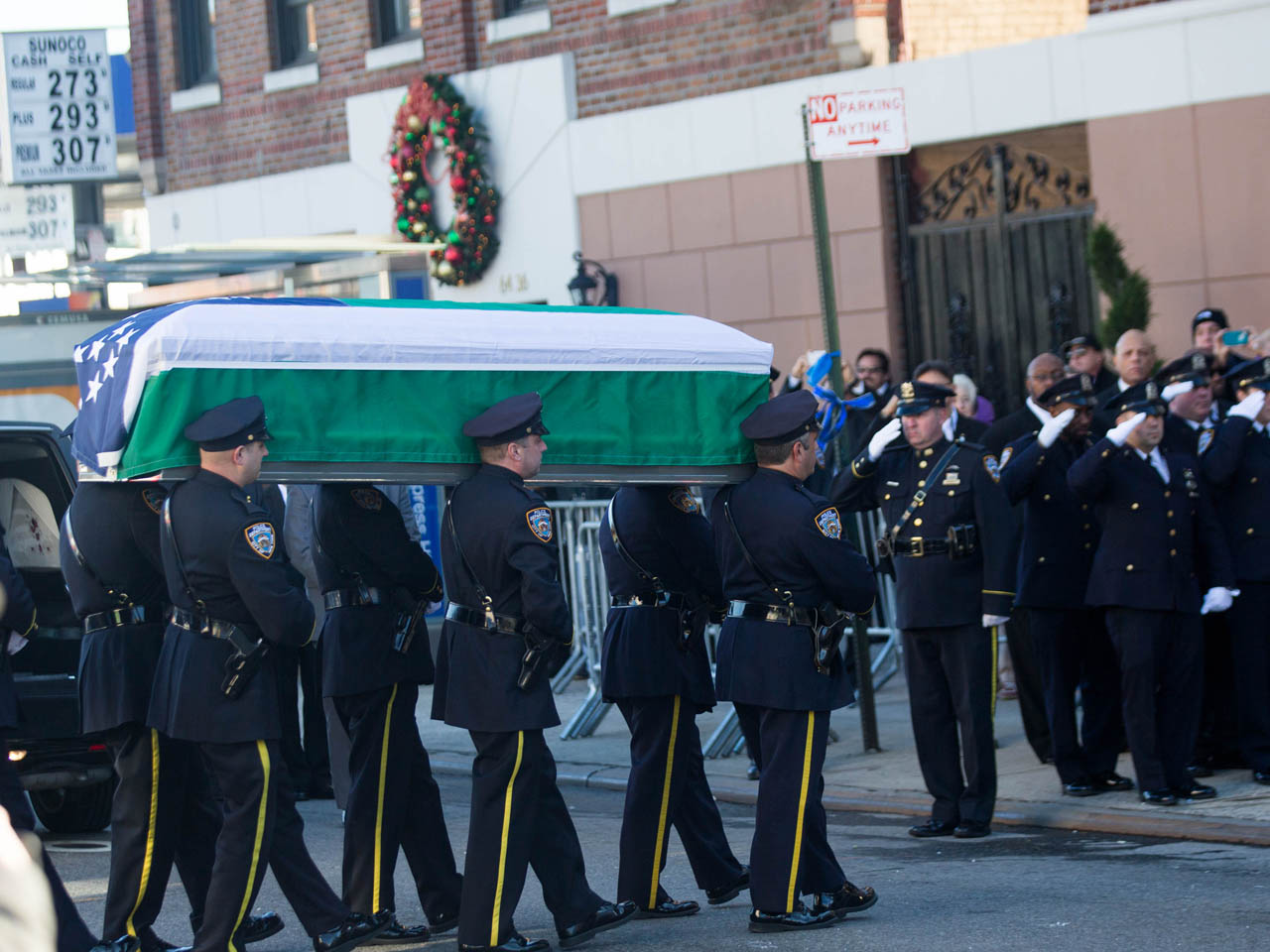 NEW YORK - Mourners began gathering Friday at a Queens church for the wake of Rafael Ramos, one of the New York Police Department officers killed in an ambush shooting last weekend in Brooklyn.

Ramos and his partner Wenjian Liu were ambushed last weekend by Ismaaiyl Brinsley after he had made threatening posts online, including references to high-profile cases of white police officers killing unarmed black men and a vow to put "wings on pigs." After shooting the officers, Brinsley ran into a Brooklyn subway station and committed suicide.

Ahead of Ramos's viewing Friday, uniformed city police officers hoisted the casket carrying his body on their shoulders as they made a solemn entrance into Christ Tabernacle Church, in the Glendale section of Queens.

A full hour before the wake was set to begin, about 100 friends and relatives of Ramos had lined up outside the church. In the evening, thousands of additional mourners were expected to spill into the streets outside the church to hear speakers eulogize Ramos. Several giant video screens were being set up for the event.

"My dad would have been there for everyone and to see so many people here for him is a testament to who he is as a person. It has been so helpful during this time," Ramos's 17-year-old son Justin said, CBS New York reported.

"I'll keep this short and sweet. Just like my brother," Cindy Ramos said, "I know you always worry about me, but you know how I roll because we were two peas in a pod. Never think, just do, and just hope for the best. Having you as a brother was one of the highest honors that could have been bestowed upon me."

Parishioners said support for the family, his church family and his police family couldn't be stronger.

"We have come together, all of us. Race, color, doesn't matter what it is," Sacita Martinez said.

Ramos's funeral is scheduled to be held at the church Saturday; Vice President Joe Biden has said he will attend, along with New York Mayor Bill de Blasio and Governor Andrew Cuomo. The New York officials also attended Ramos's wake.

Funeral arrangements for Liu have yet to be announced.

Ramos was a longstanding and deeply committed member of the church, according to family and friends.

"Whether he was helping a mom with a carriage or bringing someone to their seats, he did it with so much love and so much vigor and so much joy," Castillo said.

"My brother was a cop for 20 years, my brother-in-law is a cop," William Arundeo told CBS New York after dropping off flowers and saying a prayer. "He works in the same precinct."

Andres Nazario has been friends with Ramos for 14 years. He worked with Ramos in the usher's ministry at the church and said Ramos was also training to become a police chaplain.

"He was the best guy," Nazario said. "Best thing in the world."

Rick Lopez, an associate pastor at Christ Tabernacle, said the church's goal is to help the family and the city.

"We're a strong community and we're for the community," Lopez told CBS radio station WCBS 880. "We do a lot of outreach for the entire community and our hope is to bring New York City as one united community as a whole."

Fellow churchgoer Hilda Kiefer was among those who waited in line for hours to enter the church for the officer's wake.

"We feel sorry for the family, and nobody deserves to die like this," Kiefer said.

His compassion was in contrast to the emotionally disturbed loner who killed the officers.

Investigators say Brinsley started his rampage by shooting and wounding an ex-girlfriend in Baltimore before heading to New York.

The killings ramped up emotions in the already tense national debate over police conduct. Since Ramos and Liu were killed, police in New York say they have arrested seven people accused of threatening officers.

The tragedy also increased tensions between the New York City Police Department and de Blasio. A plane with a banner reading "de Blasio, our backs have turned to you," flew over the Hudson River Friday morning.

Ramos celebrated his 40th birthday this month. He joined the NYPD in 2012 after working as a school security officer.

The lifelong Brooklyn resident had been married to his wife Maritza since 1993 and had two sons: Justin, a sophomore at Bowdoin College in Maine, and Jaden, 13.

Community members also visited the site of the shooting in the Bedford-Stuyvesant neighborhood of Brooklyn, Friday.

Laura Hatton told CBS News she was there to "show support to the family, and to his fellow officers who I think are a little underappreciated and it's a horrific occurrence."