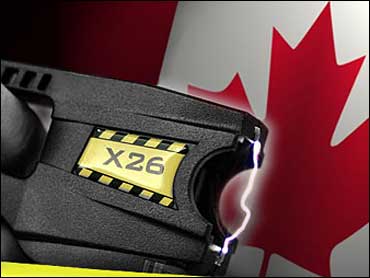 The Royal Canadian Mounted Police said Friday that it will restrict its use of Taser stun guns in response to a watchdog agency report that officers were firing them too often.

Three people have died recently in Canada after being shocked by Tasers.

The police force said it will more clearly define the type of behavior that would prompt an officer to use a Taser, limiting it to situations where "a subject is displaying combative behaviors or is being actively resistant."

The previous policy allowed officers to use a Taser when a suspect's behavior was deemed threatening.

"The RCMP recognizes the need to take action on the issues raised in the report and is committed to making immediate improvements in a number of areas," RCMP Commissioner William Elliott said.

The police use of Tasers came under review after the three recent deaths.

Robert Dziekanski died on Oct. 14 after police zapped him with a stun gun. Police said they used the Taser after he began acting erratically at an airport. Dziekanski, an immigrant who spoke only Polish, had apparently become upset after waiting for 10 hours at the airport for his mother, who was supposed to pick him up. His death brought international attention and intense criticism after video of the incident was released.

Last month, a 36-year-old British Columbia resident died four days after the province's police used a Taser on him because, they said, he was acting erratically in a store.

A Nova Scotia man died the same week, 30 hours after being shocked with the Taser by Halifax police at a jail where he was being held on assault charges. Police said he became violent as he was being booked, jumped the counter at police headquarters, sprang past officers and bolted for the door before one of the officers fired 5,000 volts from a Taser into his thigh.

More than a dozen people have died in Canada after being hit with Tasers in the last four years, according to Amnesty International. However, the Arizona-based manufacturer of Taser guns, Taser International Inc., says the devices have never been conclusively linked to any deaths in Canada.

Some 2,800 Tasers are being used by more than 9,100 RCMP members across the country and Mounties have fired the electronic guns over 3,000 times since their introduction in December 2001.

Public Safety Minister Stockwell Day last month asked Paul Kennedy, head of the Commission for Complaints Against the RCMP, to look at how the force uses the electronic guns, which can be fired from a distance of several yards or applied at close range.

Kennedy released a 53-page report that said Tasers should only be used when suspects are "combative" or pose a risk of "death or grievous bodily harm," to themselves or others.

Kennedy said Taser use "has expanded to include subduing resistant subjects who do not pose a threat of grievous bodily harm or death and on whom the use of lethal force would not be an option."

He said Taser restrictions should apply in cases of so-called "excited delirium," in which suspects are agitated and have a highly accelerated heart rate. Excited delirium has been repeatedly blamed for sudden deaths after Tasers were used.

The document stopped short of calling for a moratorium on the stun guns.