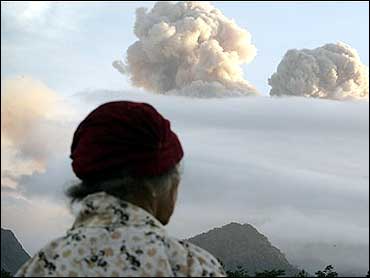 The same government trucks that hastily hauled villagers from the slopes of Indonesia's rumbling Mount Merapi carried them back on Friday, as poor farmers judged losing their livelihood to be a greater risk than losing their lives.

"If I stay at a shelter, who will care for my animals?" said Adi Wiyono, 45. "I am afraid, but they are the source of my life, my family depends on them."

Supriyatun, 30, agreed, saying she had no choice but to go back.

"I must milk my goats and sell it to survive," she said.

Indonesia's most dangerous mountain has been venting steam and debris for more than a month, and on Thursday spit billowing gray clouds of hot ash 3 1/2 miles down the slope, the largest burst yet.

Thousands of people who had refused to heed earlier evacuation orders fled, some jumping into rivers to escape the searing heat and others sprinting down the mountain or speeding off in cars and trucks.

Merapi's lava dome has swelled, raising concerns that it could suddenly collapse and send scalding clouds of fast-moving gas, rocks and debris into still-populated areas. Hundreds of aftershocks, including a 3.5-magnitude temblor Friday, added to those worries.

"The trend seems to be that the volcanic activity is increasing," said Dr. Antonius Ratdomopurbo, an Indonesian volcanologist who monitors the peak. He added, though, there "is no reason for people to be overly concerned" at present.

Some scientists say a massive May 27 earthquake that killed more than 5,700 people in an area 25 miles south of Merapi may have contributed to the restive mountain's volatility in recent weeks.

Authorities last month raised Merapi's level to the highest level and urged residents living near the volcano's 9,700-foot -high peak to evacuate. More than 20,000 packed their belongings and headed to makeshift camps set up in schools, mosques and government offices.

But thousands more stayed, saying they needed to tend to livestock and crops on the fertile slopes, and hundreds returned home Friday.

"The volcano appears to be calming down, I think the real danger has passed," Haryono, a rice and fruit farmer, said as he trudged to his village. "I have to get back to my fields and watch over my house."

Merapi's last deadly eruption was in 1994, when it sent out a searing gas cloud that burned 60 people to death. About 1,300 people were killed when it erupted in 1930.

Authorities said another major, deadly eruption would severely strain earthquake relief operations in nearby Bantul and Klaten districts. More than a half-million people were displaced in last month's quake.

"If there's a large blast at Merapi that causes deaths and injuries, we'll need help from paramedics now deployed in the quake zone — especially with severe burns," said Imam Purwadi, a government official overseeing relief efforts at both sites.

Indonesia is located in the so-called Pacific "Ring of Fire," an arc of volcanoes and fault lines encircling the Pacific Basin.

The Bulusan volcano in the central Philippines was spewing ash and hot steam into the air late Wednesday, prompting scientists to raise the alert level in fear of a bigger eruption.

In southern Japan, Mount Sakurajima also was acting up, spitting a plume of smoke about 3,300 feet into the air.

There were no reports of damage or injuries in those volcanic eruptions.