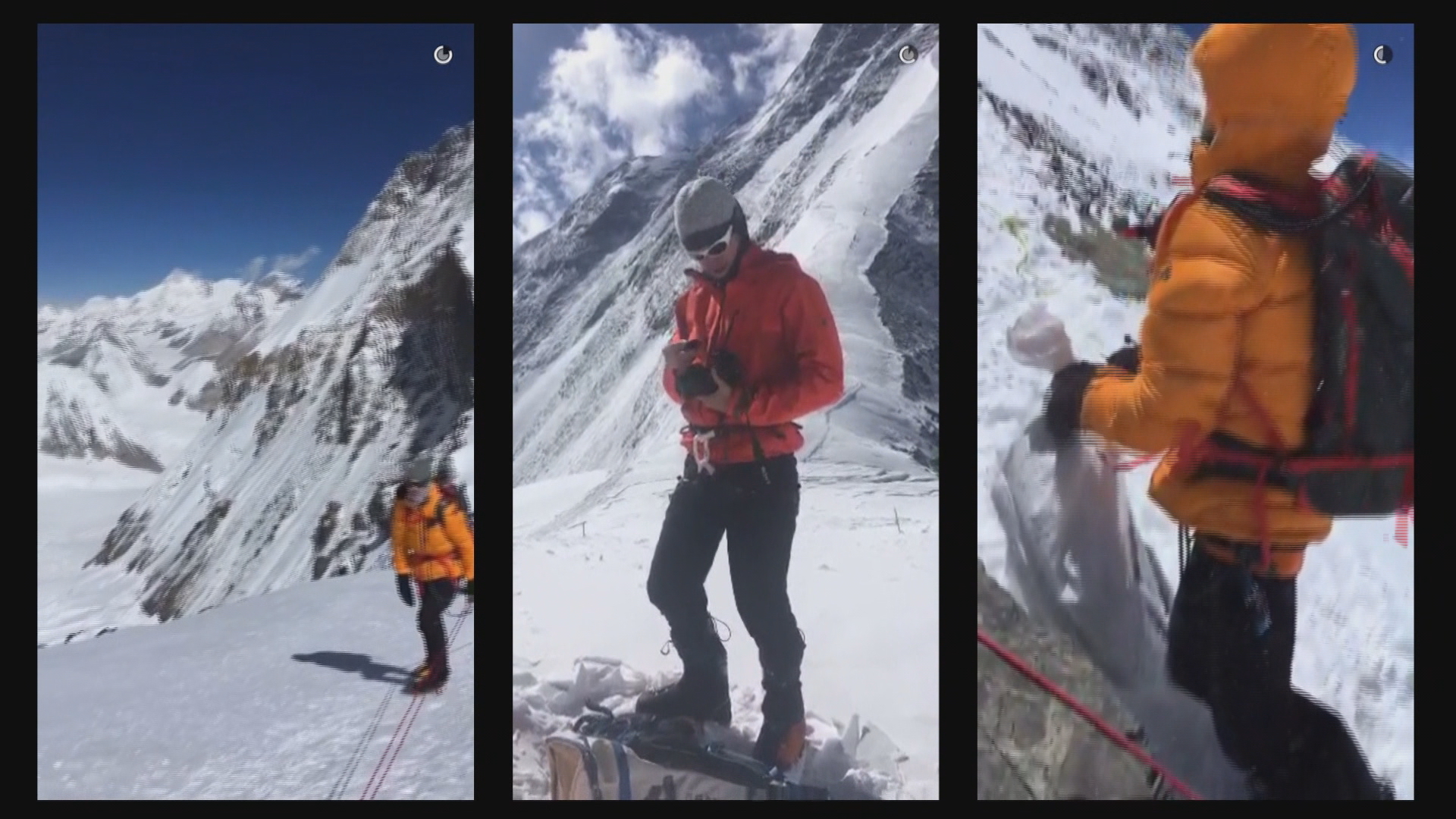 A Nepalese Sherpa Wednesday became the first climber to reach the majestic summit of Mount Everest in three years. And for the first time ever, two professional climbers are sharing their attempt in what is essentially real-time, reports CBS Sports' Dana Jacobson.

Adrian Ballinger and Cory Richards have always documented their high-altitude adventures. Ballinger has already summited Everest six times, while Richards -- a photojournalist for National Geographic -- was almost killed in an avalanche on one of the highest mountains in Pakistan.

"I've always found climbing to be a selfish pursuit -- I love it, but I also like being able to tell the stories of it and hopefully inspire or raise questions with people at home," Ballinger said.

But this year, the two accomplished climbers are attempting something new on the tallest mountain in the world; they are sharing their entire journey as it happens on Snapchat, a popular mobile app where they are posting under the username, EverestNoFilter.

"The whole point of EverestNoFilter is to give you sort of an unfiltered look at the whole thing," Richards said. "We can't make the pictures pretty, we can't edit the video. It's just instantaneous."

They shoot everything on their phones.

"It means we need patience," Ballinger said. "We've got a heater and a satellite internet terminal. Set it up, get it connected to the satellite and then sit here and press retry, retry, retry on Snapchat until it finally goes."

Each short post adds up to a daily diary that can be viewed for 24 hours, telling the story of what it's like to live and climb above 20,000 feet, including chopping ice for water and to take a shower.

This year's climb is particularly punishing on their bodies - both men are climbing without the help of extra oxygen.

"I wondered, could I take my body and my emotional strength to this extreme, to try to summit without supplemental oxygen? It's been a dream of mine all of my life," Ballinger said. "It feels like having an absolutely terrible hangover and having to get up."

"I don't know anything about that," Richards chimes in, laughing.

"Me neither, but I've heard about them," Ballinger joked.

"The vast majority of our time here is spent recovering," Richards said. "We go up on the mountain for two to four, maybe five days at a time, to let our bodies adapt to that altitude... So then we come down, we have to actually sit around a lot, and talk a lot of crap to each other and, I mean, pass the time."

Since the account's launch, their Snapchat audience has grown, from just a couple people to tens of thousands of views per snap. The men have one more training run before making a final push to the summit sometime in the next three weeks, and they said sending a snap from there is a dream.

"It would be so cool to feel good enough up there to actually do that. At the same time, it's easy for other people to forget that the vast majority of people who attempt to summit Everest without oxygen fail," Balllinger said. "Our top priority is to come home at the end of this adventure with all our fingers and all our toes and we both have 10 of each."

"The old saying is, going up is optional, coming down is mandatory. So that's rule number one," Richards said. "Snapping - number two."

Ballinger and Richards are climbing as part of the Eddie Bauer Guide and Athlete Team, as they push to be the first to essentially live-snap their summit.

Interestingly, Eddie Bauer also outfitted the very first American to ever reach the top of Everest; Jim Whittaker in 1963. No one was able to see that image until he returned from the mountain and processed the film. But we could be seeing images from Richards and Ballinger within moments of their summit.