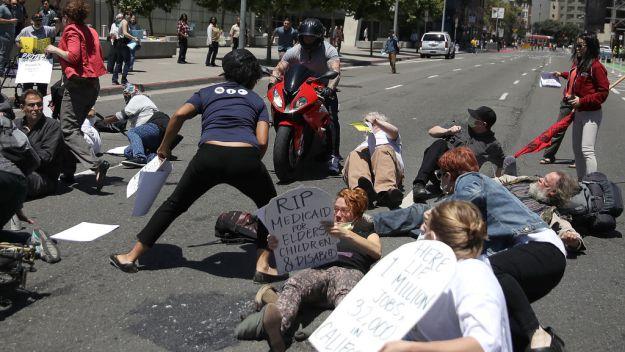 SAN FRANCISCO — A man who allegedly rode his motorcycle through a crowd of activists blocking a San Francisco street during a Wednesday afternoon protest against the GOP health care bill was detained by police after the dangerous stunt.

CBS San Francisco reports protesters had gathered outside the San Francisco Federal Building at 7th and Mission streets at around 12:30 p.m. and were conducting a "die-in," in which a group of around 20 people laid down on Seventh Street to block traffic, when the incident occurred.

Emily Lee, a spokeswoman for the group Bay Resistance, which organized the protest along with Senior and Disability Action, said the man drove up on a red motorcycle, traveling the wrong way on Seventh Street.

"Everyone thought he was just confused, but he didn't stop, and at some point it became clear he was going to come through the crowd and people jumped out of the way," Lee said.

"He was definitely targeting us," she said. "It was unclear if it was for political reasons or if he was just mentally unstable or what, but it was terrifying."

Lee said the man then turned around and began to come back through the crowd.

Federal police officers on the scene ordered him to stop and one pulled out a gun when he initially failed to listen to orders to get off his bike, Lee said.

Police Officer Robert Rueca said there were no injuries as a result of the incident. The suspect is in custody but charges have not yet been determined.

While police did not release his identity, reports indicated the motorcycle used in the incident was registered to Jeffery Dillon of San Francisco. Dillon is same man who is listed as an administrator of a Facebook group called the "White Privilege Club."

The "die-in" was intended to illustrate the potential effects of Republican health care legislation now moving through the U.S. Senate. A Congressional Budget Office report found that 23 million fewer people would have insurance by 2026 under a similar law approved in the U.S. House of Representatives in May.

The event was part of a national day of action regarding the health care legislation, which is moving through the Senate with little public input or notice.

Lee said the group lying in the street included seniors and people with various disabilities, because they would be among those most affected by the legislation.