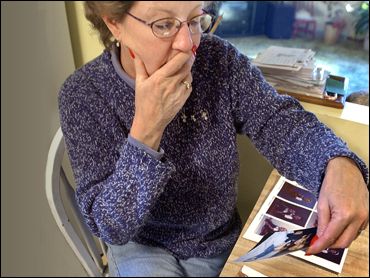 A woman accused of drowning her three young sons had asked her mother to take custody of two of the children so she could move to St. Louis with her boyfriend, the mother said.

"She didn't think she could take all the kids with her, but I never thought anything would happen," Senters, the father of one of the boys, told WCIA-TV of Champaign.

Hamm, 27, and her boyfriend, Maurice Lagrone Jr., 28, are charged with murder in the drowning deaths of her children, 6-year-old Christopher Hamm, 3-year-old Austin Brown and 23-month-old Kyleigh Hamm.

The children died when the car they were in plunged off a boat ramp into Clinton Lake on Sept. 2. Hamm and Lagrone were on the lakeshore when rescuers arrived. Both remain in custody on $5 million bond.

Two hours after Hamm cried as a judge read the first-degree murder charges against her, her mother, Ann Danison, said she couldn't help but wonder if she could have averted the tragedy.

"She was my only child. My only grandkids. I don't have any more," Danison said, her voice breaking. "And I'll never have them."

Danison said Hamm had asked her to care for two of her sons so she could move to St. Louis with Lagrone. But Danison told her she could take only Christopher.

Speaking to The Associated Press in her home, Danison said she "hurt for" Hamm when she saw her in court, "but at the same time I was mad, too."

Danison said she believes Hamm is guilty but that Lagrone somehow "brainwashed" her into believing she was doing the right thing.

"Amanda is not a violent person. What she did was wrong. I can't accept what happened," Danison said.

Authorities have refused to disclose a motive in the case, although they say they have one and that it doesn't involve life insurance money. The case is being handled by a special prosecutor because Danison is the office manager for the state's attorney.

It sounds awful, but parents who kill their children are not as uncommon as most people would believe. CBS News Correspondent Cynthia Bowers reports, surprisingly, 1 in 3 children under the age of 5 who are killed in this country, are murdered by their mother. And one of every 33 homicides in this country is a parent killing a child, including 450 times last year, Bowers reports.

Hamm's court-appointed attorney, Steve Skelton, said he may ask to move the trial from Clinton, a central Illinois town of about 7,500. "The massive amount of media coverage makes a fair and impartial trial in the current venue unlikely," he said.

Lagrone has not yet hired an attorney.

Danison described her daughter as a high school dropout who had been treated for alcohol abuse but who seemed to calm down after becoming a mother.

"Amanda's a very depressed person, low self-esteem, very insecure. But she'd laugh with the kids. She always had a great Christmas for them. ... She'd plan for their birthdays," Danison said.

Danison said she didn't approve of Lagrone because he couldn't hold a job and wouldn't care for the children, although he played with them.

Preliminary hearings were set for Jan. 7.