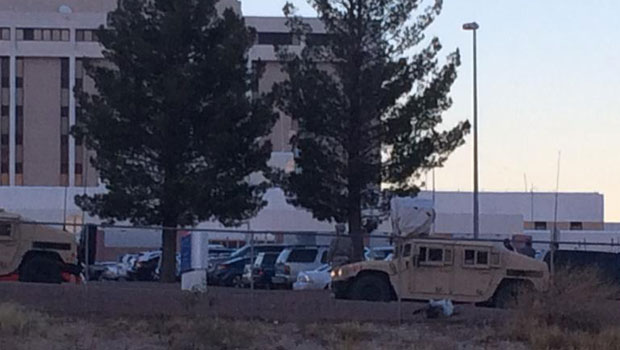 EL PASO, Texas - The Iraq veteran who shot and killed a Veterans Administration hospital doctor before turning the gun on himself Wednesday afternoon was a former employee of the clinic who had threatened the doctor more than a year ago.

The gunman, who sources told CBS News was identified as 48-year-old Jerry Serrato, killed Dr. Timothy Fjordbak, a psychologist at the El Paso VA Health Care System, which is near Fort Bliss Army Base.

Serrato served in the Army from 2006-2009. He left with an honorable discharge and a rank of Specialist, CBS News correspondent David Martin reported. He had done a four-month tour in Iraq. It is unclear when his employment at the clinic ended.

According to a listing on the Veterans Administration website, Fjordbak was a mental and behavioral health pscychologist licensed to practice in Florida, Georgia and New Mexico. He began treating troops returning to the United States after the Sept. 11 attacks, according to the El Paso Times.

Fort Bliss Army Base authorities and the FBI confirmed the doctor was killed in the incident. Serrato committed suicide after shooting Serrato, officials said at a press conference Wednesday.

But officials have no specific explanation about what led to the violence, or why it happened, although Serrato is said to have threatened Fjordbak in October 2013. It is also unclear what, if any, relationship the two men had.

Agents on Wednesday began the mammoth task of questioning the hundreds of patients, staff and others who were present at the clinic when the shooting took place. Investigators have revealed few details of the attack.

"We're trying to expeditiously get through those hundreds of witnesses to find out details about this incident," said Douglas Lindquist, FBI special agent in charge of the El Paso office.

The shooting comes just four months after the Fort Bliss Commanding Officer Maj. Gen. Stephen Twitty announced new security measures after a military assessment found the base was not fully in compliance with Department of Defense directives.

The measures included random vehicle checks and limiting access to Defense Department personnel at some gates. However, four gates still remained open to the public, according to a press release.

The El Paso clinic came under scrutiny last year after a federal audit showed it had among the longest wait times for veterans trying to see a doctor for the first time. A survey last year of more than 690 veterans living in El Paso County found that they waited an average of more than two months to see a Veterans Affairs mental health professional and even longer to see a physician.

It was not clear if that scandal was linked to the shootings.

"We found many veterans seeking care at the El Paso VA Health Care System faced challenges accessing care timely, particularly patients that were new" to the system, the report said.