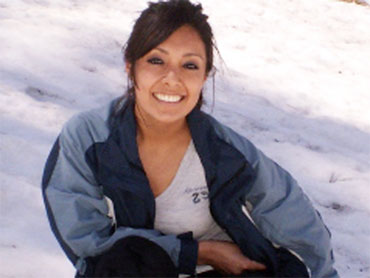 LOS ANGELES (CBS/AP) No mother should have to go through Gloria Lema's nightmare.
The California mother is pushing for an investigation into the killing of her daughter Gloria Daniela Lopez in Ecuador, but the U.S. Embassy is doing little about the case, the Los Angeles Times reports.

"The police ...can't do anything, because they said she's American," Lema said to the paper. "They need to send someone from here (United States) to investigate."

Lema said Wednesday her 26-year-old daughter was stabbed and her throat was slit in Ambato, Ecuador, three days before she was scheduled to return home to California after a vacation.

A family friend also claims Lopez was decapitated and possibly raped, according to the Los Angeles Times, yet no official has confirmed this statement.

According to the paper, Lopez was a sociology student at California State University, Los Angeles, who was enjoying a summer vacation with a cousin and aunt in the provincial capital Quito.

"She wanted to finish her degree and return to work with poor children there. She was beautiful inside and out," Lema told the Los Angeles Times.

Lema travelled to Ecuador to identify her daughter's body and says she was frustrated when police told her they had no evidence in the case, the paper reported.

But a local Ecuadorian newspaper, El Heraldo Ambato, published a photo from her daughter's crime scene, according to the Washington Post. The photo shows a man in a white coat carrying a plastic bag with a cell phone inside, which Lema believes belonged to her daughter.

"It's a month already, and they don't have anybody," Lema continued, "They don't do anything, nothing."

A spokeswoman for the American embassy in Quito says Lopez's body was found Sept. 10 but the consulate wasn't notified until Sept. 15.

Embassy officials say they're working with local prosecutors and police, who say the slaying was likely a "crime of passion" and that they have not identified any suspects.

But Lema believes there are clues out there. According to the Los Angeles Times, Lema said Ecuadorian law enforcement officials told her they did not have the technology or the $2,600 to do DNA tests.

"I think they want money," Lema, a hairstylist, told the paper, "I wanted to defend my daughter, but I don't have any, and I didn't understand because I was emotional and in so much pain."