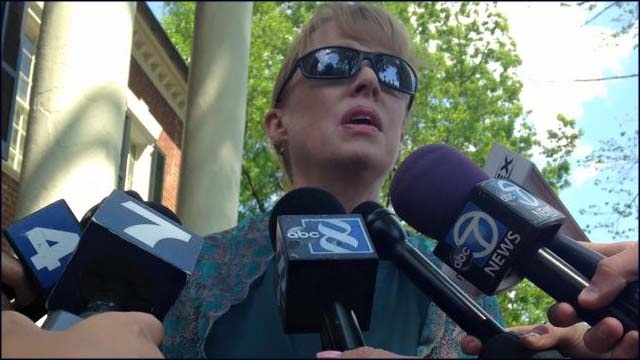 "I looked his mother in the eyes, I told her I understood this was very difficult on their family as well. I gave her my condolences and I shook her hand. It was the right thing to do," Harrington told reporters following the hearing. "I think she was surprised, and I think she was receptive."

Matthew was in court Wednesday for hearings on two murder cases. He's been charged with first-degree murder and abduction to defile in the death of 20-year-old Morgan Harrington, a Virginia Tech student who disappeared in 2009 after attending a Metallica concert in Charlottesville.

Authorities previously charged Matthew with capital murder in the September 2014 disappearance and death of University of Virginia student 18-year-old Hannah Graham. Prosecutors are seeking the death penalty in the Graham case and the trial has been set for July 2016.

Matthew's mother, who during the proceedings sat on the opposite side of the courtroom from Harrington and her husband, did not speak to reporters as she left the courtroom with other family members.

Judge Cheryl V. Higgins denied two motions by Matthew's attorneys in the Graham case. They had asked the judge to release information about members of the Albemarle County grand juries over the last four years, including their names and addresses. That information is necessary to determine whether the state followed jury selection procedures required by law, they said.

His lawyers also filed a motion to appoint an expert to determine what risk Matthew would pose to society if he's given life in prison instead of the death penalty.

Higgins did approve a motion by Matthew's attorneys to allow them to file motions under temporary seal in order to prevent potential witnesses from being subjected to intense media scrutiny prior to hearings before the trial.

Higgins also scheduled the start of Harrington's case for Oct. 24, 2016. She initially set it for Oct. 17, but switched the date after she and the lawyers in the case realized that Harrington had gone missing on that date in 2009.

After police named Matthew as a person of interest in Graham's disappearance, he fled and was later apprehended on a beach in Texas. A DNA sample collected after he was taken into custody connected him to a 2005 sexual assault in Fairfax County, according to authorities.

Matthew, 33, already faces up to life in prison after being convicted in June of attempted capital murder, abduction and sexual assault in that case. He's expected to be sentenced in October.

Matthew, a former hospital worker and taxi driver, also has been accused of raping students in 2002 and 2003 at Liberty University and Christopher Newport University, where he had played football, but those cases were dropped when the women declined to press charges.

Before Wednesday's hearings, Gil Harrington told reporters she wants Matthew to plead guilty in both murder cases he faces in order to spare the families involved, including his own.

"It would be the most merciful to all the families involved," she said. "Many families have been decimated by the crimes of Jesse Matthew, including his own."