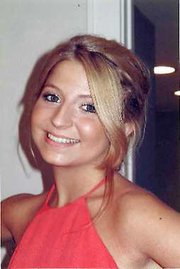 In a letter to the Herald-Times Charlene Spierer also urged students who began the fall term Monday to "be safe" and take care of each other."

In addition, her letter revealed a detail on her daughter's disappearance police have not yet publically released. It says that the 20-year-old from Greenburgh, N.Y., last used her cell phone at 12:16 a.m. on June 3, just hours before she vanished after a night out with friends.

Charlene Spierer writes that her daughter placed that call "when she was still safely in the confines" of Smallwood Plaza - the Bloomington apartment complex where Lauren lived.

The full letter Charlene Spierer wrote for the Herald-Times can be viewed below.

The purpose of what I am sharing with you is not to speculate about what happened. The purpose of this is to encourage people to take precautions to be safe.

Recently, we decided to explore the environs of Bloomington at 3:00 a.m. It was shocking to see a lone girl walking home with no shoes shortly thereafter. We are living with Lauren's disappearance every minute of every day and thought, quite naively, that everyone else is doing the same. I said to someone recently that I hope what happened to Lauren will never happen to another person. That people will learn from this horrific episode in our lives. Alas, he didn't think that would be the case. Clearly, he was correct.

Lauren is a daughter, a sister, a best friend. She could be you. In the blink of an eye, she disappeared on June 3, 2011.