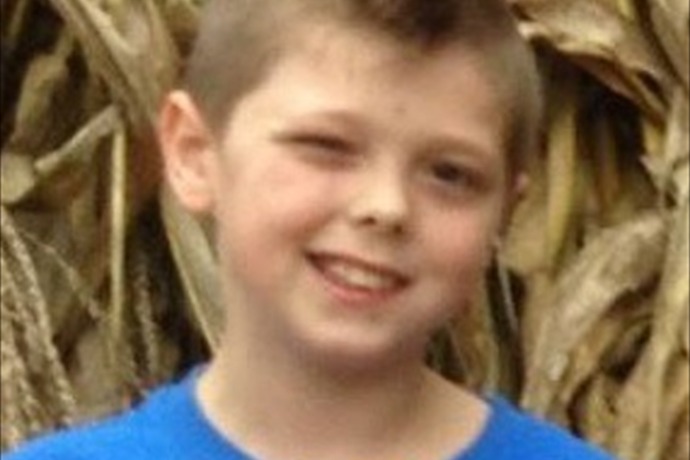 The mother of an 8-year-old boy killed in a fire says she is very proud of her son, who rescued six people from the blaze but died when he ran back to try to save two older relatives.

Tyler Doohan is being remembered as a hero as investigators work to determine what started the devastating fire at a mobile home in suburban Rochester, N.Y.

"It makes me so proud that he went the way that he did," Tyler's mom, Crystal Vrooman, told CBS affiliate WROC. "He made it big, he made it really big and I'm really proud."

Tyler was spending the Martin Luther King Jr. holiday weekend with his grandfather and other relatives when a fire broke out in the grandfather's mobile home in Penfield early Monday morning.

Tyler woke six people, including two other children ages 4 and 6, and escaped, but he died when he ran back into the burning trailer to help his grandfather and another relative, officials said.

"I went to go pick him up and they told me he was down at his friend's house and I said, 'Well, he doesn't have school tomorrow. Grandpa can bring him home tomorrow. He can stay an extra day.' And then the next morning I had cops at my door," Vrooman told the television station.

Tyler died along with his grandfather and another, adult male relative. The victims had not been formally identified and the second man's relationship to Tyler wasn't immediately clear.

Several pets also died in the fire, including a dog, cats, a rabbit and hamsters, officials said.

The cause of the fire was under investigation, but initial findings indicated the fire began accidentally as a result of an electrical problem, WROC reported.

At least one firehouse plans to pay tribute to the boy at his funeral, the date for which had not been set.

"He saved six people. They all would have died if he hadn't woken up," Chris Ebmeyer, chief of the volunteer fire company in Penfield, a suburban town of 36,000 residents, told the Associated Press.

The fire chief said nine people were staying at the 14-foot-by-60-foot trailer when the fire started around 4:45 a.m. Monday. Tyler woke up when the blanket covering his sleeping 4-year-old cousin caught fire, Ebmeyer said.

Supporters of the family have started an online fundraising campaign on YouCaring.com to help raise money for the funerals.

Vrooman said Tyler was a fun-loving child who enjoyed life.

"He just wanted to have fun," she told WROC. "He never wanted to grow up and now he doesn't have to."