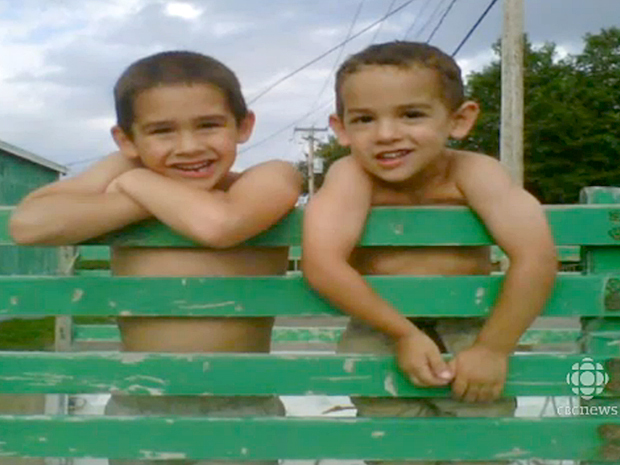 TORONTO The mother of two small boys strangled by a 100-pound pythonin their sleep earlier this week in Canada had posted photos on Facebook last year of the boys playing in and cleaning her neighbor's snake enclosure.

Mandy Trecartin's Facebook page has hundreds of photos of her sons, including a few showing Noah Barthe, 4, and Connor Barthe, 6, happily scrubbing the glass enclosure, which she identified as an anaconda habitat. It was not clear whether the enclosure is the one that held the python.

Preliminary results from autopsies performed on the boys show they died from asphyxiation, officials said Wednesday. The shocked community planned a vigil Wednesday.

The snake, an African rock python, apparently escaped from its enclosure, slithered through a ventilation system and fell through the ceiling into the room where the young boys were sleeping, authorities said. They had been visiting the apartment of a friend whose father owned an exotic pet store on the floor below.

A snake expert said it was possible that the python was spooked and simply clung to whatever it landed on.

Authorities on Wednesday planned to remove other animals from the pet shop, though Royal Canadian Mounted Police Sgt. Alain Tremblay said the 4.3-meter (14-foot) python was being kept inside the apartment. Police are treating the deaths in Campbellton, New Brunswick, as a criminal investigation.

The pet store owner, Jean-Claude Savoie, has told a television station that he didn't hear a sound and discovered the "horrific scene" when he went into his living room on Monday morning.

Steve Benteau, a spokesman for the provincial Natural Resources Department, said no permit was issued for an African rock python. The department said the snake is generally only permitted in accredited zoos, unless there is a special permit.

Reptile expert Bry Loyst, curator of the Indian River Reptile Zoo in Ontario, said the New Brunswick government has asked him for help in removing animals from the pet store and taking them to accredited zoos elsewhere in the country.

Loyst said police told him it wasn't the first time that the python had escaped. Royal Canadian Mounted Police Const. Julie Rogers-Marsh said she could not confirm that because she had not heard that.

Snake expert John Kendrick, a manager at the Reptile Store in Hamilton, Ontario, said that if pythons are startled, they can grab something for stability, and it's possible that the python was just holding on to what it landed on, Kendrick said.