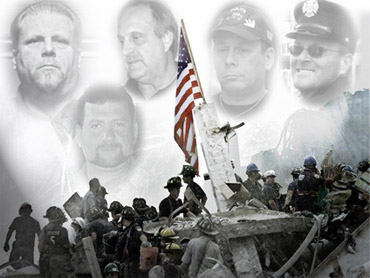 More than 10,000 workers exposed to the tons of toxic dust that blanketed ground zero after the World Trade Center fell have ended their bruising legal fight with New York City and joined a settlement worth at least $625 million, officials said Friday.

The deal will resolve an overwhelming majority of the lawsuits over the city's failure to provide protective equipment to the army of construction workers, police officers and firefighters who spent months clearing and sifting rubble after Sept. 11, 2001.

Among the thousands who sued, claiming that soot at the site got into their lungs and made them sick, more than 95 percent eligible for the settlement agreed to take the offer. Only 520 said no or failed to respond.

City officials and lawyers for the workers said they welcomed a resolution to a case that had pitted New York and a long list of demolition companies against the very men and women who helped lower Manhattan recover.

"This settlement is a fair and just resolution of these claims, protecting those who came to the aid of this City when we needed it most," Mayor Michael Bloomberg said in a statement.

Paul Napoli, a senior partner with the law firm representing most of the workers, called the settlement "the best result, given the uncertainty of protracted litigation."

The settlement, which has been on the table since the spring, won approval by the thinnest of margins. Under terms of the deal, it would only become effective if at least 95 percent of eligible plaintiffs signed on. It just cleared that hurdle, with 95.1 percent.

The settlement will provide at least $625 million to the workers, although related deals with other defendants, including the Port Authority of New York and New Jersey, will likely boost that total to $725 million or more.

A majority of the money will come from a special $1 billion fund set up by Congress and paid-for by the American people.

Workers could have qualified for an even larger total, topping $800 million, if enough workers had accepted the offer. The payment amount was based partly on how many agreed to join.

The deadline to opt in to the deal was Tuesday. The results were withheld from the media and public for three days while lawyers loaded documents into a computer system and verified the numbers.

Barring an act of Congress, the settlement will be the largest pool of compensation for people who fell ill in the years after their service at the trade center.

The U.S. Senate is considering legislation, already passed in the House of Representatives, that would authorize as much as $7.4 billion in medical care and payments to the sick.

Thousands of people believe they have illnesses caused by trade center dust. The lawsuits cited hundreds of different ailments, both serious and mundane, with the most common being a respiratory problem similar to asthma.

Under the deal, the plaintiffs will be spared the tough task of proving that their illnesses were related to their work at ground zero.

Scientists have documented elevated rates of asthma among ground zero workers and a decline in lung capacity among many firefighters but are undecided about other diseases.

The hurdle of proving a cause loomed especially high for people with common illnesses such as cancer, which doctors have not connected to the dust.

Now, even people who are not sick at all but are worried they might become so in the future will qualify for a few thousand dollars. Some very ill people, or the relatives of people who have died, could get more than $1 million.

A group of court-appointed administrators will set the amount each plaintiff is to receive over the next few months.

The litigation has been costly, with hundreds of millions of dollars spent in legal fees, and with the first of what could have been thousands of individual trials looming last spring, the two sides worked out a deal that would have had the workers divide $575 million to $657 million.

That initial settlement was rejected by U.S. District Judge Alvin Hellerstein, who said it shortchanged the workers and gave too much money to their lawyers. A second round of negotiations produced richer terms that won his approval.

Workers have had months to decide whether to accept or reject the offer. The deadline to decide was extended twice before finally expiring Tuesday.

Only the workers who had sued before the announcement of the first settlement in April were eligible to participate.

The acceptance rate was highest among the workers with the most severe health ailments, according to a tally provided by lawyers in the case.

Those plaintiffs also stand to receive the bulk of the money under the settlement, which calls for each worker's share to be determined based on the seriousness of their illness and the liklihood it is connected to hazardous substances at ground zero.