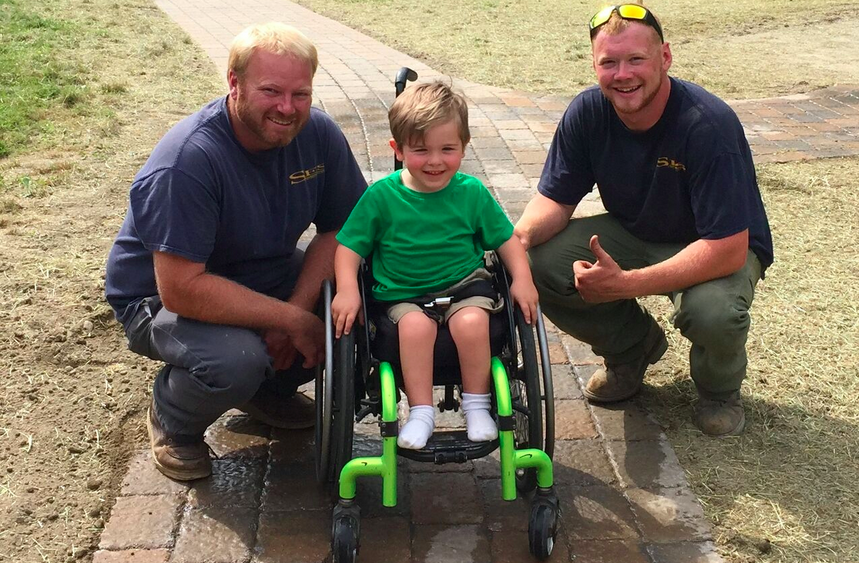 It hadn't even been 24 hours since his birth, and doctors already discovered a tumor on his spine and in his abdomen. The next day, they determined it was cancerous. The day after that, he began chemotherapy.

Dan Tilton, now a father of 8, couldn't believe something like this could happen to his 3-day-old son.

Fast forward three years to a cancer-free Kellan and Tilton says it "still blows our mind to this day."

But the smiling tot still has one more obstacle to overcome.

Six months after finding out he was born with neuroblastoma, doctors removed most of the tumor. But by then, the tumor had done its damage and Kellan was left paralyzed from the waist down.

At 18 months, he was driving a wheelchair "better than anybody can drive a car now," his dad said.

Despite his incredible "control," there's still a lot the 3-year-old can't do -- like visit his dad in the backyard barn.

In the spring, when Kellan was approached by Make-A-Wish at his home in Detroit, Maine, he asked for a path from the house to the barn.

"He could have taken a trip anywhere," said Make-A-Wish Marketing Director Sonya Purington. "For him, what was most important was to be able to go outside and -- as he said -- 'wheel myself from my house down to the barn.'"

When we begin granting wishes, more times than not, it's safe to say, those kids are wishing for Disney, Purington said, surprised at Kellan's "simple" wish.

"What I love about this [wish] is it gives him the mobility and some independence," she said. "It's going to be a wish that lasts him for a long long time -- a unique wish for someone who is wise beyond his years."

Right now, Kellan doesn't have any freedom in his own backyard.

"I have to carry him," Tilton said. "Now he has freedom -- he has this gorgeous path from house."

In total, seven companies and about 10 workers have come together to donate material, manpower and expertise to make Kellan's wish come true.

The workers were nearly able to finish the 200-foot path in a week. But the best thing about the workers isn't their speed, Tilton says.

"As a family watching this, every time the guys walked by each other, they gave each other high fives," he said. "It gives me goosebumps talking about this; they were having the time of their lives."

Kellan is also having the time of his life.

On Saturday, Kellan is going to be surprised with the final "big reveal."

"His wish was simple, humble, impactful," Purington said. "I'm glad it will enable him to be with family and spend time with his best friend -- his dad."