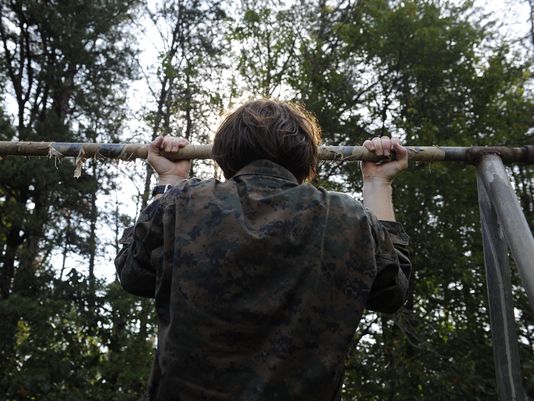 WASHINGTON -- More than half of female Marines in boot camp can't do three pullups, the minimum standard that was supposed to take effect with the new year, prompting the Marine Corps to delay the requirement, part of the process of equalizing physical standards to integrate women into combat jobs.

The delay rekindled sharp debate in the military on the question of whether women have the physical strength for some military jobs, as service branches move toward opening thousands of combat roles to them in 2016.

Although no new timetable has been set on the delayed physical requirement, Marine Corps Commandant Gen. James Amos wants training officials to "continue to gather data and ensure that female Marines are provided with the best opportunity to succeed," Capt. Maureen Krebs, a Marine spokeswoman, said Thursday.

Starting with the new year, all female Marines were supposed to be able to do at least three pullups on their annual physical fitness test and eight for a perfect score. The requirement was tested in 2013 on female recruits at Marine Corps Recruit Depot, Parris Island, S.C., but only 45 percent of women met the minimum, Krebs said.

The Marines had hoped to institute the pullups on the belief that pullups require the muscular strength necessary to perform common military tasks such as scaling a wall, climbing up a rope or lifting and carrying heavy munitions.

Officials felt there wasn't a medical risk to putting the new standard into effect as planned across the service, but that the risk of losing recruits and hurting retention of women already in the service was unacceptably high, she said.

Because the change is being put off, women will be able to choose which test of upper-body strength they will be graded on in their annual physical fitness test. Their choices:

Officials said training for pullups can change a person's strength, while training for the flex-arm hang does little to adapt muscular strength needed for military tasks

The delay on the standard could be another wrinkle in the plan to begin allowing women to serve in jobs previously closed to them such as infantry, armor and artillery units.

The military services are working to figure out how to move women into newly opened jobs and have been devising updated physical standards, training, education and other programs for thousands of jobs they must open Jan. 1, 2016, said Navy Lt. Cmdr. Nathan Christensen, a Defense Department spokesman. They must open as many jobs to women as possible; if they decide to keep some closed, they must explain why.

Military brass has said repeatedly that physical standards won't be lowered to accommodate female applicants. Success for women in training for the upcoming openings has come in fits and starts.

In fall 2012, only two female Marines volunteered for the 13-week infantry officers training course at Quantico, Va., and both failed to complete it.

But the following fall, three Marines became the first women to graduate from the Corps' enlisted infantry training school in North Carolina. They completed the same test standards as the men in the course, which included a 12-mile march with an 80-pound pack and various combat fitness trials such as timed ammunition container lifts and tests that simulate running under combat fire.

Officials had added specific training for female recruits when the pullup requirement was announced in December 2012, and they came up with a workout program for women already serving.

Military testing for physical skill and stamina has changed over the decades with needs of the armed forces. Officials say the first recorded history of Marine Corps physical fitness tests, for example, was 1908 when President Theodore Roosevelt ordered that staff officers must ride horseback 90 miles and line officers walk 50 miles over a three-day period to pass. A test started in 1956 included chinups, pushups, broad jump, 50-yard duck waddle and running.

The first test for women was started in 1969: A 120-yard shuttle run, vertical jump, knee pushups, 600-yard run/walk and situps.