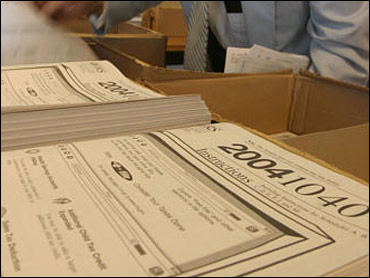 Two-thirds of U.S. corporations paid no federal income taxes between 1998 and 2005, according to a new report from Congress.

The study by the Government Accountability Office, expected to be released Tuesday, said about 68 percent of foreign companies doing business in the U.S. avoided corporate taxes over the same period.

Collectively, the companies reported trillions of dollars in sales, according to GAO's estimate.

"It's shameful that so many corporations make big profits and pay nothing to support our country," said Sen. Byron Dorgan, D-N.D., who asked for the GAO study with Sen. Carl Levin, D-Mich.

"Half of all business income in the United States now ends up going through the individual tax code," Edwards said.

The GAO study did not investigate why corporations weren't paying federal income taxes or corporate taxes and it did not identify any corporations by name. It said companies may escape paying such taxes due to operating losses or because of tax credits.

More than 38,000 foreign corporations had no tax liability in 2005 and 1.2 million U.S. companies paid no income tax, the GAO said. Combined, the companies had $2.5 trillion in sales. About 25 percent of the U.S. corporations not paying corporate taxes were considered large corporations, meaning they had at least $250 million in assets or $50 million in receipts.

The GAO said it analyzed data from the Internal Revenue Service, examining samples of corporate returns for the years 1998 through 2005. For 2005, for example, it reviewed 110,003 tax returns from among more than 1.2 million corporations doing business in the U.S.

Dorgan and Levin have complained about companies abusing transfer prices - amounts charged on transactions between companies in a group, such as a parent and subsidiary. In some cases, multinational companies can manipulate transfer prices to shift income from higher to lower tax jurisdictions, cutting their tax liabilities. The GAO did not suggest which companies might be doing this.

"It's time for the big corporations to pay their fair share," Dorgan said.