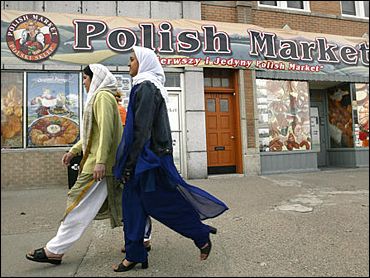 Long known for pierogi and polka, the bustling city of Hamtramck, Mich., is now debating whether to add an amplified Arabic chant to the local sights and sounds.

In a sign of the deep changes in this once predominantly Polish town, the City Council is expected Tuesday to pass a noise ordinance amendment that would

permit mosques to issue the traditional Islamic call to prayer over loudspeakers
.

But some longtime residents are resisting what they consider an affront to non-Muslims.

Hamtramck, a city of 23,000 completely surrounded by Detroit, has an old-fashioned, small-town feel, with mom-and-pop stores and American flags adorning many of the tightly packed houses. Polish groceries and restaurants abound, and if you stop someone to ask for directions, there is a good chance that person speaks only Polish.

But in recent years, the city has become much more diverse. Stores selling saris and halal meat have opened, and signs in Bengali, Arabic and Bosnian compete with signs in Polish and English. Only 23 percent of the city's residents specified Polish ancestry in the 2000 census. The town also has a sizable black population — 15 percent.

The relationship between old Hamtramck and new Hamtramck has not been without friction. On Election Day in 1999, members of a residents group questioned would-be voters of Middle Eastern or Asian appearance on their eligibility to vote. In response to complaints of discrimination, the Justice Department sent monitors during local elections in 2001.

Now the request by the Bangladeshi al-Islah mosque for permission to air the Arabic call to prayer via loudspeakers five times a day has again revealed tensions.

City Council president Karen Majewski said she expects the council to unanimously approve the amendment allowing the call to prayer — which was traditionally sung from a minaret but today is generally recorded — despite some protests at a hearing last week.

"It takes only one minute — what is it, five times a day? Five minutes only — that's all we are asking for," Masud Khan told CBS News Correspondent Lee Cowan.

Muslims figured it was no different than Christians ringing church bells which incidentally ring just across the street from the mosque five times a day, reports Cowan.

Joanne Golen, a lifelong Hamtramck resident, said she finds the content of the call to prayer offensive.

"It says Allah is the one and only God. I am Christian. My God is Jesus Christ. That is my only objection — that I have to listen to a God other than the one I believe in praised five times a day," said Golen, 68.

Caroline Zarski, 81, said allowing the call would put Islam above other religions.

But Masud Khan, secretary of the al-Islah mosque, said the purpose of the call, which lasts less than two minutes, is not to proselytize.

"We are not inviting" non-Muslims, he said. "We are calling our Muslim people, reminding them they are obligated to come to pray."

Hamtramck's Bosnian and Yemeni communities each have their own mosques, but neither has raised the issue of the call to prayer.

Many Hamtramck Muslims said the call to prayer is equivalent to church bells. And Hamtramck has several churches that ring their bells.

Opponents take issue with that comparison, saying that church bells today are used to mark the time of day and have no religious significance. If the bells are the issue, then turn them off, they say.

The call to prayer can be heard elsewhere in metropolitan Detroit. The city of Dearborn, home to one of the largest communities of Arab Americans, has allowed the call under its general noise ordinance, without a specific amendment.

Hamtramck's amended ordinance would prohibit the call before 6 a.m. or after 10 p.m. That will not always fit in with the Islamic schedule, but it is a compromise the mosque says it is willing to make.

The Michigan chapter of the American-Arab Anti-Discrimination Committee urged tolerance over the issue, condemning the "resentment and negativity" expressed during the debate.

City Council member Shahab Ahmed, who is Bangladeshi and attends al-Islah, said he was surprised the call to prayer turned into a big issue. But he said he previously experienced anti-Muslim sentiment in Hamtramck — particularly during his 2001 council bid following the Sept. 11 attacks.

But Majewski, the City Council president, said: "I think the people of Hamtramck are extraordinarily tolerant, just as evidenced by the fact that they choose to live in Hamtramck with people from all over the world."