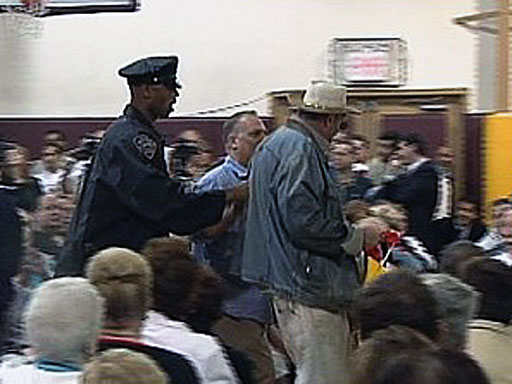 NEW YORK (CBS/WCBS) Tempers flared and fears were ignited at a community meeting in Staten Island, N.Y. Wednesday night, where many residents questioned why a Muslim group is being allowed to build a mosque on the site of a former convent.

Was it religious intolerance or legitimate fear about the Muslim American Society's (MAS) alleged support for Hamas?

Whatever the reason for the chaos, chaos it was. An overflow crowd grew until the gates around the meeting hall had to be secured by police.

Questions were shouted in almost equal measure at community leaders, representatives of St. Margaret Mary R.C. Church, who agreed to sell the land to MAS, and the three members of group who attended the meeting, including the president of the local chapter of MAS, who expressed his exasperation at the way the meeting was handled.

Robert Spencer, founder of "Jihad Watch," asked the members "will you here and now denounce Hamas and Hezbollah as jihad terrorist organizations?"

Another resident said "I'd like to know why the MAS is on the watch list for terrorism."

MAS is not on the state department's current list of foreign terrorist organizations, and the representatives denied any links to extremist groups and said the mosque would promote peace and understanding.

It was not clear whether the group would consider changing its plans for the mosque given the unfriendly un-welcome at the meeting.