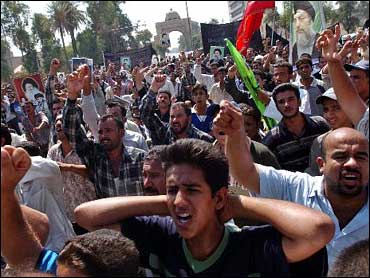 Police have arrested 19 men - many of them foreigners and all with admitted links to al Qaeda - in the roundup of suspects in the bombing carnage at the Imam Ali shrine in the holy city of Najaf, a senior Iraqi investigator told The Associated Press Saturday.

The official, speaking on condition of anonymity, said two Iraqis and two Saudis were grabbed shortly after the Friday bombing, admitted al Qaeda ties and gave information leading to the arrest of the 15 others. They include two Kuwaitis and six Palestinians with Jordanian passports. The remainder were Iraqis and Saudis the official said, without giving a breakdown.

Wahhabism is the strict, fundamentalist branch of Sunni Islam from which Osama bin Laden, the al Qaeda leader, draws spiritual direction. Based in Saudi Arabia, its followers show little tolerance for non-Wahhabi Sunnis and Shiites. Bin Laden was born in Saudi Arabia, where Wahhabism originated in the 18th century.

U.S. officials have not confirmed any of the details of the arrests, and have not taken an active role in the investigation because of Iraqi sensitivity to any U.S. presence at the holy site.

But the arrests would seem to substantiate Bush administration claims that bin Laden's followers have taken their Islamic militant war against the West to Iraq, where U.S. forces are struggling to maintain security.

Hospital officials said 85 people died, including leading Shiite Muslim cleric Ayatollah Mohammed Baqir al-Hakim. Earlier counts had put the toll higher, but were reduced after some deaths were found to have been reported twice.

Thousands of angry mourners called for vengeance as they gathered outside the Imam Ali shrine on Saturday.