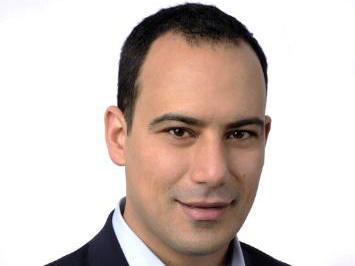 Mosheh Oinounou has been named executive producer of the "CBS Evening News with Jeff Glor" beginning Feb. 5, it was announced Tuesday by CBS News President David Rhodes. Oinounou will assume his new role as Steve Capus steps down from the broadcast in the coming weeks.

Since joining CBS News in 2011, Oinounou has been integral to the launch of several key programming initiatives throughout the news division.

He served on the management team that created CBSN, becoming the first executive producer of the 24/7 live, streaming news service in 2014. More recently, Oinounou oversaw "CBSN: On Assignment," a new docu-style, newsmagazine primetime series which aired on the CBS Television Network in the summer of 2017. He also contributed to the launch of "CBS This Morning" upon joining as a senior producer for the program in 2011.

"Mosheh brings a rare combination of energy, creativity and digital experience which will be of great value as we continue to develop the 'CBS Evening News with Jeff Glor,'" said Rhodes. "With Mosheh's involvement, we hope to take further advantage of opportunities across CBS Interactive as well as other platforms. We also look forward to tapping into his experience producing fast-paced, political breaking news as we enter the midterms and prepare for the next presidential election cycle."

"I look forward to working with Jeff and the talented team at 'CBS Evening News,'" said Oinounou. "It is a privilege to have the opportunity to work on this broadcast as we make it even more relevant in the 24/7 digital world."

Oinounou joined CBS News in 2011 as a senior producer of "CBS This Morning" where he oversaw Washington and political coverage for the program, including several interviews with Presidents Barack Obama and George W. Bush and a wide range of business and political leaders. He later helped to coordinate daily coverage out of New York.

In 2014 Oinounou was brought in to help manage the launch of CBSN, the first-of-its-kind 24/7 live streaming network news service. As CBSN's first executive producer, Oinounou led the hiring and build-out of the editorial, operations and production teams. He then oversaw daily editorial coverage and CBSN's expansion to seven days a week, including the integration and launch of the "CBS Weekend News" on the broadcast network. At CBSN, Oinounou recently oversaw "CBSN: On Assignment," a new docu-style, newsmagazine primetime series which launched on the CBS broadcast network in summer 2017. He was responsible for the development and editorial content of the program.

Prior to joining CBS News, Oinounou served as the international editor for Bloomberg Television where he managed foreign news coverage. He also managed onsite coverage of the 2011 Sendai earthquake and Fukushima nuclear disaster and the 2010 Deepwater Horizon oil spill.

Before Bloomberg Television, Oinounou was a producer and researcher at Fox News Channel for "Fox News Sunday." He also served as a Capitol Hill producer and an embedded campaign reporter for the network covering the 2008 presidential campaigns of Rudy Giuliani and John McCain.

Oinounou has been honored with a 2013 Emmy Award for Outstanding Investigative Journalism as the senior producer for "CBS This Morning's" report "Exposing the Business of Congress." While at CBSN, the service won a 2016 Webby Award.

A native of Prairie View, Illinois, he has an M.A. in security policy studies and B.A. in political communication from the George Washington University.