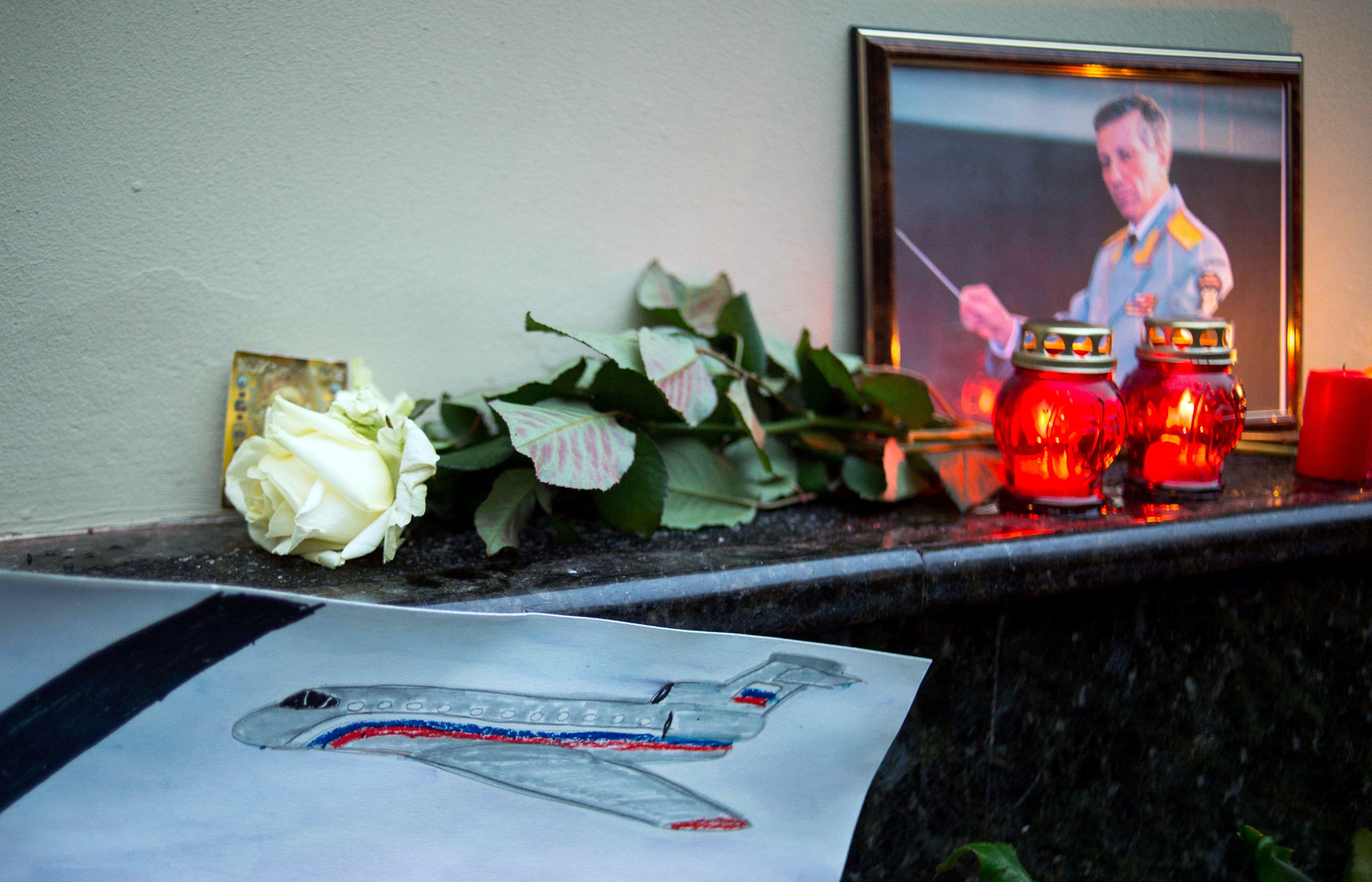 SOCHI, Russia -- The Kremlin on Monday played down the possibility that a terror attack might have downed a Syria-bound Russian plane, killing all 92 people on board, as the nation observed a day of mourning for the victims, including most members of a world famous military choir.

The Tu-154 owned by the Russian Defense Ministry crashed into the Black Sea early Sunday two minutes after taking off in good weather from the city of Sochi. The plane was carrying members of the Alexandrov Ensemble, often referred to as the Red Army Choir, to a New Year’s concert at a Russian military base in Syria. Nine Russian journalists and a Russian doctor known for her charity work in war zones were also on board.

About 3,500 people, 43 ships and 182 divers have been sweeping a vast crash site for bodies of the victims and debris, and dozens of drones and several submersibles also have been involved in the search. Rescue teams so far have recovered 11 bodies and numerous body fragments, which have been flown to Moscow for identification.

Divers have located parts of the plane’s fuselage and other fragments, but the search for the jet’s flight recorders will likely prove challenging as they lack underwater locator beacons for easy spotting common in more modern planes. Russia asked the authorities of Georgia’s breakaway republic of Abkhazia, which borders Russia just 4.3 miles east of the Sochi airport, to help monitor the Black Sea area for possible plane fragments or bodies.

Officials sought to squelch speculation that the crash might have been caused by a bomb planted on board or a portable air defense missile.

But some aviation experts pointed that the crew’s failure to communicate any technical problem and a large area over which fragments of the plane were scattered point at a possible explosion on board.

Evidence of a bombing of a Syria-bound military flight would badly embarrass the Kremlin, highlighting Russia’s extreme vulnerability to attacks even as it boasts its success in Syria after Aleppo fell into President Bashar Assad’s hands.

President Vladimir Putin’s spokesman, Dmitry Peskov, told reporters that an attack isn’t a likely scenario. Sokolov said investigators were looking into a possible technical fault or pilot error as the most likely reasons behind the crash.

But some experts remained skeptical, noting that the crew would have reported any technical glitch.

“Possible malfunctions ... certainly wouldn’t have prevented the crew from reporting them,” Vitaly Andreyev, a former senior Russian air traffic controller, told RIA Novosti, adding that an “external impact” was the most likely reason.

Russia’s main domestic security and counter-terrorism agency, the FSB, said it has found “no indications or facts pointing at the possibility of a terror attack or an act of sabotage on board the plane.”

The plane departed from the Chkalovsky military airport just outside Moscow and stopped in Sochi for refueling early Sunday. The FSB said border guards and military servicemen were protecting the plane as it sat on the tarmac in Sochi, and the chief pilot along with the flight engineer personally monitored the refueling. The agency said that a border guard officer and a customs official were the only ones to briefly come on board in Sochi.

Some Russian media pointed at lax security at Chkalovsky outside Moscow where the plane was based, saying that it’s quite porous compared to civilian airports.

Alexander Gusak, a former chief of the FSB special forces unit, also hinted at security breaches at Chkalovsky and said that even a much more secure Sochi airport could be vulnerable.

“It’s possible to penetrate any facility. It depends on your skills,” Gusak told Dozhd TV.

Russian planes have been downed previously in attacks -- as recently as 2015. In October last year, a Russian passenger plane was brought down by a bomb over Egypt, killing all 224 people aboard. Officials said the explosive device was planted in the plane’s luggage compartment. A local affiliate of the Islamic State of Iraq and Syria (ISIS) claimed responsibility.

In August 2004, two Russian planes were blown up on the same day by suicide bombers, killing 89 people. A Chechen warlord claimed responsibility for the twin attacks, which were made possible by lax security at a Moscow airport.

While ruling out an attack in Sunday’s crash, the FSB said that investigators are looking into bad fuel, pilot error, alien objects stuck in the engines or equipment failure.

John Goglia, a former U.S. National Transportation Safety Board member and aviation safety expert, argued that while pilot error or bad fuel “would be high on my list,” they wouldn’t have prevented the pilot from alerting traffic controllers to the situation. He also noted that the Tu-154 has been “a pretty reliable platform.”

The Tu-154 is a Soviet-built three-engine airliner designed in the late 1960s. More than 1,000 have been built, and they have been used extensively in Russia and worldwide. The plane that crashed Sunday was built in 1983, and underwent factory check-ups and maintenance in 2014 as well as earlier this year.

While the Tu-154 is no longer used by Russian airlines because it’s too noisy and fuel-hungry, the Russian military has continued to operate it. The plane has been popular with crews who appreciate its maneuverability and ruggedness.

Flags were at half-staff across Russia on Monday, nationwide television stations canceled their entertainment programs and the Cabinet began its session with a moment of silence as part of the nationwide mourning. People piled up red and white carnations outside the Moscow office of the Alexandrov Ensemble, popular across the world for its fiery performances.

Vadim Ananyev, a soloist who stayed home with his family, said he was devastated.

“I have lost my friends and colleagues, all killed, all five soloists,” Ananyev told The Associated Press. “I have known these people for 30 years. I know their wives and children. I feel terrible for the children and for all that I have lost.”

Ananyev said he had received condolences from all over Russia and from abroad.

“We were loved all over the world, never mind the political situation,” he said.

In Rome, Pope Francis led thousands of faithful in silent prayer for the plane crash victims and noted that the Russian army choir had performed in 2004 at the Vatican.

“May the Lord console the dear Russian people and the families of the passengers who were on board: journalists, crew and the excellent choir and orchestra of the armed forces,” the pope said, reports Vatican Radio. “May the blessed Virgin Mary sustain the search operations underway.”