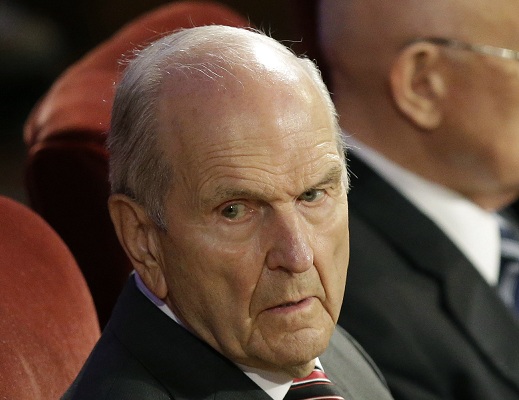 SALT LAKE CITY -- A high-ranking Mormon leader says the church policy against same-sex marriage was a revelation from God.

Apostle Russell M. Nelson, head of the religion's governing body and next in line for the Mormon presidency, said in a worldwide speech Sunday that Church of Jesus Christ of Latter-day Saints President Thomas S. Monson received instructions regarding same-sex couples directly from God.

"Each of us during that sacred moment felt a spiritual confirmation," he said, reports CBS affiliate KUTV. "It was our privilege as apostles to sustain what had been revealed to President Monson."

Nelson said that led the church to consider gay marriage a sin worthy of expulsion and forbid children of such couples from becoming members of the church. Those children can become Mormons once they are 18 if they renounce same-sex marriage.

KUTV reported in November on the major policy announcement, the Church of Jesus Christ of Latter-day Saints said children living in same-sex households may not be blessed as babies or baptized. The policy took effect immediately.

"A natural or adopted child of a parent living in a same-gender relationship, whether the couple is married or cohabiting, may not receive a name and a blessing," the policy reads.

Nelson, a 91-year-old apostle, described how church leaders arrived at the decisions during a live-streamed speech from the campus of church-owned Brigham Young University-Hawaii.