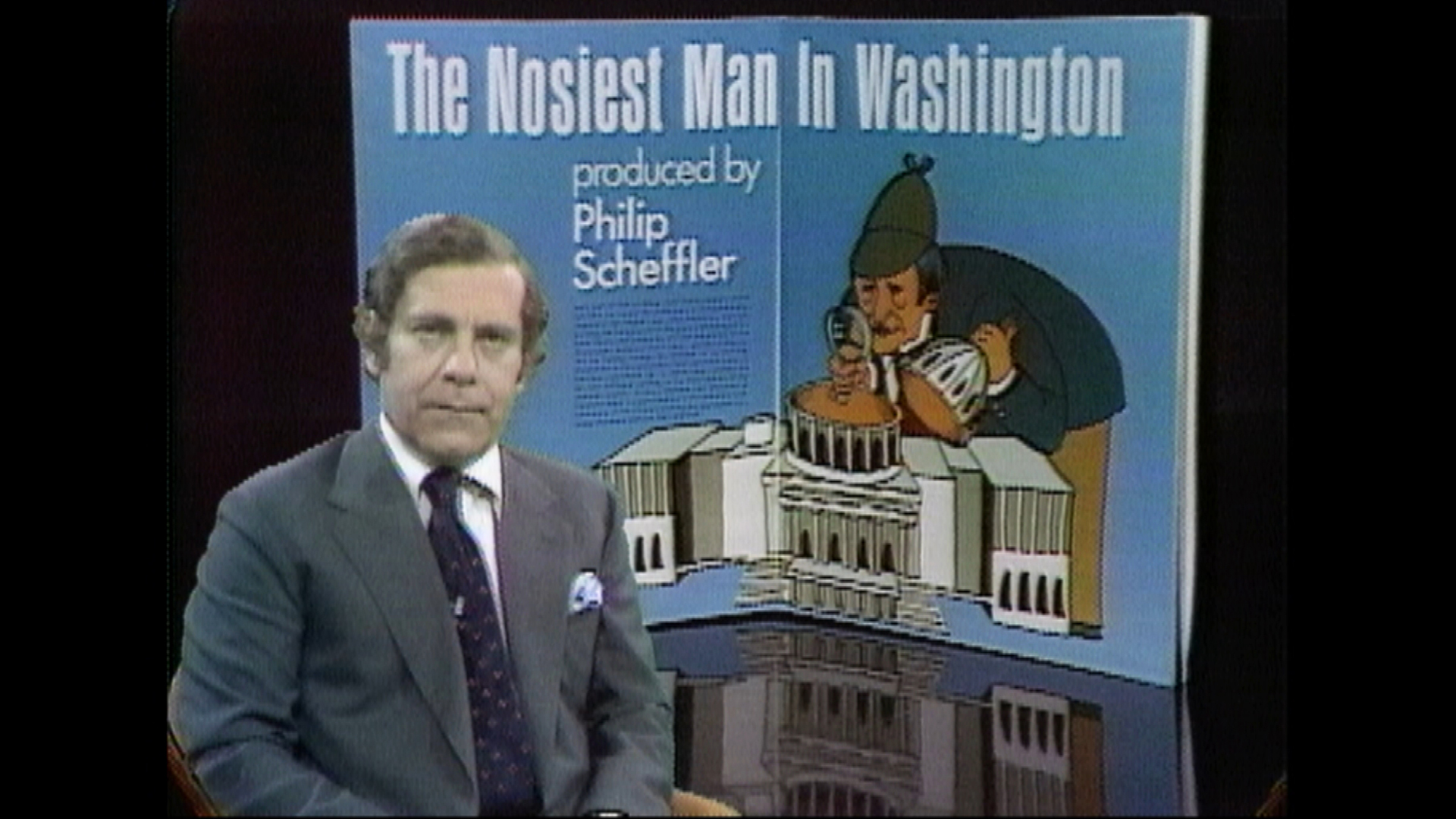 It was 1972. The war in Vietnam still raged, and the Watergate was known only as architect Luigi Moretti's inspired update of Washington, D.C.'s notoriously boring granite-block office buildings.

With the slightly bemused, avuncular style that would become as emblematic of him as his dapper wardrobe and peerless prose, correspondent Morley Safer introduced the 60 Minutes audience to "The Nosiest Man in Washington." The segment was a revealing profile of syndicated columnist Jack Anderson, perhaps the most renowned newspaper journalist of the time, and it aired on 60 Minutes, March 26, 1972.

The producer of the 18-minute profile was Phil Scheffler, and it featured Morley good-naturedly prodding Anderson into revealing how he had ferreted out the secrets of Washington's landmark government institutions: the Nixon White House, the scandal-mired Congress and the profligate Pentagon in the midst of an unpopular war.

The segment and the characters riveted me and a few others who gathered in a dormitory "common room" in far-off Nebraska to watch on the sole color television in the building.

This was long before Morley became a Sunday night icon for telling the stories of subjects both quirky and consequential. It was also before Phil Scheffler became 60 Minutes' executive editor, referee and traffic cop of the broadcast, and the sage, thoughtful, patient advisor to a corps of rambunctious, hot-headed 60 Minutes producers. Two decades later, that corps included me and Jeff Fager, now the heir to that legacy as executive producer of the modern 60 Minutes.

Four years after seeing Morley's report on Jack Anderson, and a stint in the military, I became a "legman" for Jack Anderson himself, learning the ropes a "muckraker"-- a less refined term for what is now called "investigative reporting."

By 1986, I was plying those skills at the CBS Evening News and then, after a tryout that consisted of producing a few segments myself, I had the great good fortune to join the 60 Minutes team and revel in the company of Morley, Mike Wallace, Lesley Stahl, Steve Kroft, Ed Bradley and Bob Simon. On the broadcast's 25th anniversary, we all celebrated at a black-tie soiree in the Metropolitan Museum of Art's Temple of Dendur, where all those living legends presided like princes of Egypt.

Often I think about how that 1972 segment brought together three masters of journalistic craft and how lucky I was to know all of them as colleagues and mentors. Jack Anderson died in 2005 after a crippling fight with Parkinson's. Phil Scheffler passed just last month, and of course, Morley only days ago at age 84.

As I replayed the 1972 segment this past week, I was prodded to rifle through my archives, resurrect and read once more a top-secret CIA document declassified under the Freedom of Information Act in 1985. The document is a 40+-page CIA report of a covert effort dubbed "Operation Mud Hen." Another onetime Jack Anderson alumni, Mark Feldstein, gave me a copy of the document when his gripping book about the era, "Poisoning the Press: Richard Nixon, Jack Anderson and the Rise of Washington's Scandal Culture," was published in 2010.

"Operation Mud Hen" chronicled in detail the activities of Anderson, along with Phil Scheffler and Morley. Unbeknownst to any of them, throughout the 60 Minutes production of "The Nosiest Man," teams of CIA officers were trailing Anderson and the CBS crew. It was an early part of the Nixon White House's effort to plug the "leaks" of sensitive information that kept appearing in Jack's column. The surveillance, ordered by then-CIA Director Richard Helms, was a precursor to the infamous "White House plumbers" who ultimately were caught red-handed in the midst of burglaries now popularly known to history as the Watergate scandal. Watergate, as any elementary student of American history should know, ultimately led to the first resignation of a U.S. President, Richard Nixon. "Operation Mud Hen" was a violation of the CIA's charter, which prohibited domestic spying activity on U.S. citizens.

We knew none of this at the time, and it wasn't until years after the 60 Minutes segment that we learned the plumbers existed and that Anderson was at the top--at least alphabetically--of President Nixon's "Enemies List." In fact, one of the White House plans to plug leaks included a plot to knife Anderson to death and make it look like a street robbery. Happily, cooler heads prevailed.

Morley, who had already felt the ire of Nixon's predecessor Lyndon Johnson for his eye-opening reports from Vietnam, went on to earn the enmity of other presidents--and the respect of legions of TV viewers--for his pursuit of truth in journalism and for his remarkable erudition. And Phil was there all the time, unheralded and in the shadows, but a reliable friend and calm voice of reason amidst the occasional chaos.

"Operation Mud Hen" never yielded any actual information about who was leaking to Jack Anderson, though it wasn't for lack of trying. In the file are poor, grainy facsimiles of photographs of Anderson, Morley and Phil during the production of the 60 Minutes segment. Phil, however, was not listed in the surveillance reports by name, but only as an "unidentified bearded/bald-headed male." Had the hapless CIA agents paid attention, they might have connected the mysterious, unidentified man to the "Produced by" byline prominently featured on the "book" behind Morley in his studio introduction to the segment later that month.

Forty-some years later, the remembrance of one intersection of three giant practitioners of journalism is more than just a quaint anecdote. There are lessons to be learned about the responsibility of journalists to question on behalf of citizens those who govern us. There are few better able to check the hands on the levers of power to ensure, as Jack Anderson routinely bellowed, "the people are the sovereign." It's also a reminder that when journalists practice their craft with care and zeal, it can have real impact. Sometimes, more than we know.

Howard L. Rosenberg is a producer for 60 Minutes.

From the 60 Minutes archives: Little Richard