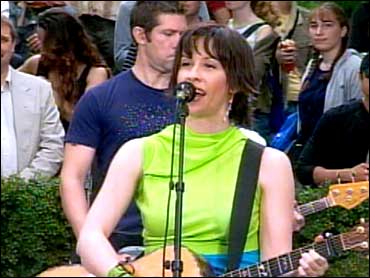 Alanis Morissette is known for fiery, sometimes controversial, lyrics that tackle all kinds of life issues. But on her latest CD, the singer/songwriter shows a softer side.

Morissette is on tour promoting the new album "So-Called Chaos," which has 10 new original songs, including the current single "Everything."

She kicked off The Early Show's summer concert series with some of her new songs, along with well-known tunes from her past.

The seven-time Grammy winner, who has sold more than 40 million records worldwide, says "Everything" is the ultimate love song to herself.

She tells co-anchor Hannah Storm, "Basically, the last two years, I have been really aspired to love all parts of myself. It's deep, it's smart, profound, flaky, all of it. So in loving all of those different parts I just become more peaceful, because I'm not struggling against these parts. The song's to myself, and it's also my partner a friend of mine, who loved me in a way I never have been loved before, very unconditionally."

The man she refers to is actor Ryan Reynolds. She says, "We've been embarking upon this blessed journey to an extent that I've never, you know, really gone to before. I feel really blessed, humbled by it," she says.

"Eight Easy Steps," another new single, is about finding gifts in all her struggles.

The themes are a little different from those on her 1995 CD, "Jagged Little Pill." That album became an anthem for young girls who weren't content to take the life given to them, but they were ready and willing to make some noise. The album earned Morissette four Grammy Awards.

Asked how long it takes her to write her songs, she says, "About 20, 30 minutes. If it becomes a really belabored process, I usually stop. I don't want it to be too intellectual."

Living it is the hard part and writing it is the easy part, she says, "I spend five years living it, 10 minutes writing about it."

In 1998, Morissette wrote and co-produced the song "Uninvited" for "The City of Angels" soundtrack. It earned her another pair of Grammys.

Her sophomore release, 1998's "Supposed Former Infatuation Junkie," featured the hits "Thank U," "Unsent" and "So Pure," and was also a worldwide success.

In 1999, Morissette produced her "MTV Unplugged" album, intimately reworking her material and introducing some unreleased material recorded before a live audience at New York's Brooklyn Academy of Music.

Morissette wrote and produced "Under Rug Swept" in 2002, creating a mix of acoustic and electric guitars and keyboards.

Morissette performed on The Early Show plaza, "Everything" and "Eight Easy Steps" from her album "So-Called Chaos," and her hit "Ironic" from her debut album "Jagged Little Pill."