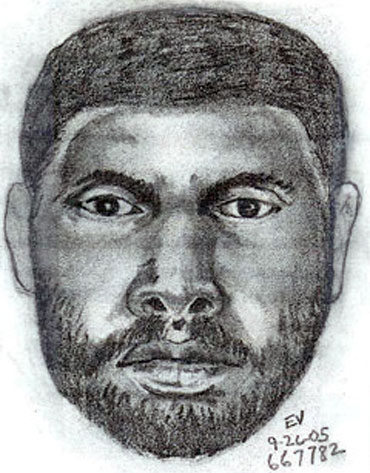 Forensic evidence gathered in the investigation into the slaying of the Virginia Tech student matches that from an unsolved 2005 abduction and sexual assault in northern Virginia, state police said Thursday.

State police spokeswoman Corinne Geller refused to identify the type of forensic evidence that was found.

Harrington's remains were found on an Albemarle County farm on Jan. 26, more than three months after she disappeared from a Metallica rock concert at the University of Virginia.

Police released a composite sketch of the suspect in the 2005 case based on the victim's description of her attacker, but warned that he may have changed his appearance.

In that case, a 26-year-old woman was walking home from a grocery store in Fairfax when a man grabbed her from behind, carried her to the pool area of a townhouse complex and sexually assaulted her.

Police are trying to identify the suspect, and attempting to determine what kind of contact he had with Harrington the night of her disappearance, and what his role may have been in her disappearance and death, Geller said.

"Before today, there was the abstraction of a murderer that killed our daughter, but now that you see a face with it, it makes you very angry," Dan Harrington said. "The anger that I have has kind of been multiplied because I now see a face of someone who did this to another human being."

On comments posted by Harrington's mother Gil on the family's website on Wednesday, she warned her daughter's killer that his luck would run out.

"That corpse will not rest. Morgan wants justice," she wrote to the "monster" who killed her daughter. "A day of reckoning is coming!"

The chief medical examiner's office has determined that Harrington's death was a homicide, but officials have said they have no further information on how she was killed. Her parents have said her bones were shattered.

Police have said the person who killed Harrington likely knew the area where her body was found in a remote hayfield 10 miles southwest of Charlottesville, where she was separated from her friends Oct. 17 while attending a Metallica concert. Investigators said only a person familiar with the farm or the immediate area would have dealt with the property's obstacles, including streams, fences and changing terrain.

The Harringtons said "a wealth of physical evidence" was found at the scene.

Dan Harrington said he hopes the sketch, despite its age, will register with someone who knew the suspect.

The suspect is described as a black male, 25 to 35 years old, approximately 6 feet tall with a medium build, with black hair, a beard and a mustache.

Anyone with information about what happened to Morgan Harrington are asked to call the police at 434-352-3467.