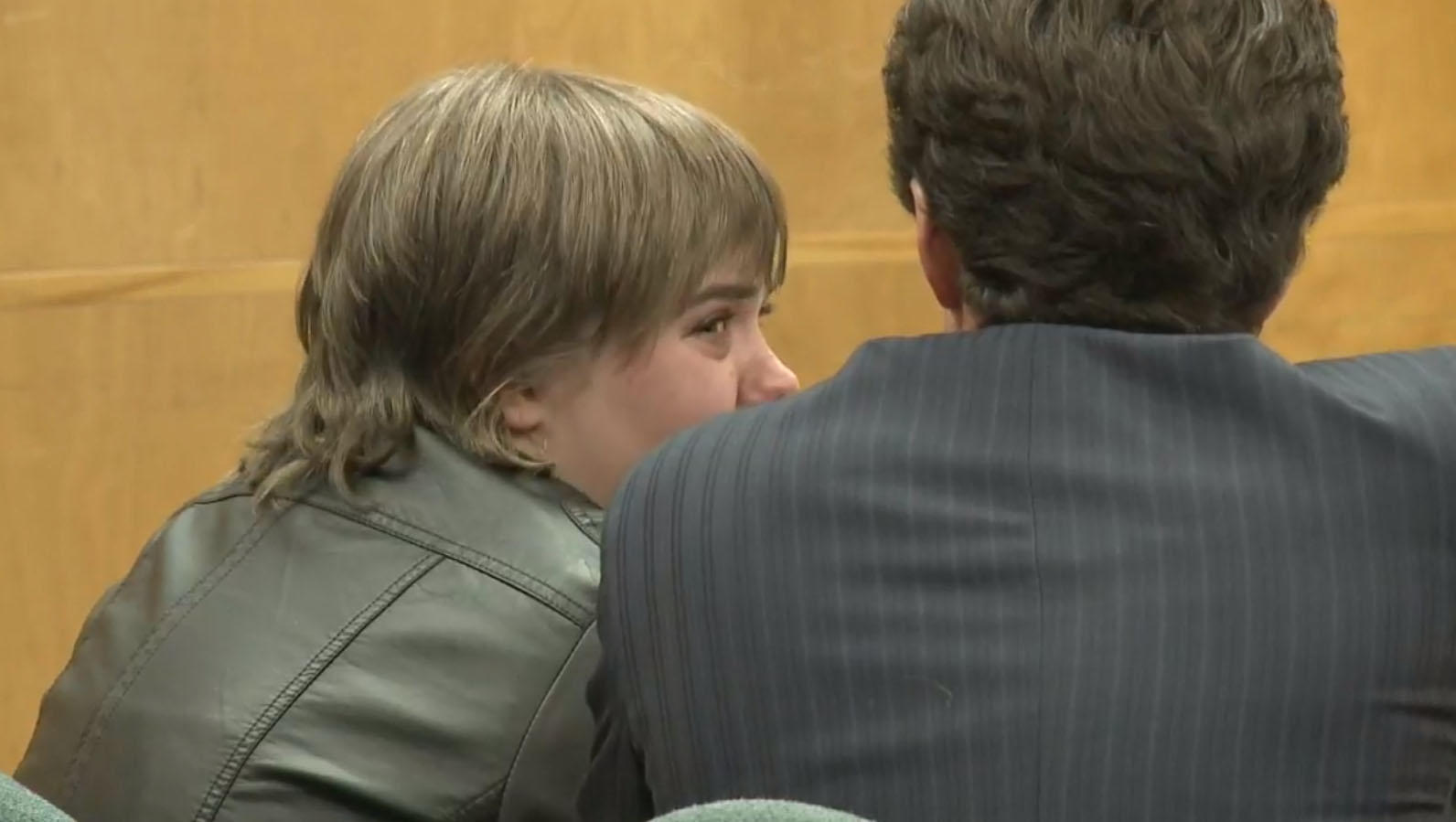 WAUKESHA, Wis. – A Wisconsin girl broke down in court Thursday as a judge asked her to recount a 2014 stabbing attack on a classmate she said she carried out to please the fictional horror character Slender Man.

Morgan Geyser, now 15, sobbed during her plea hearing Thursday, during which a judge accepted her guilty plea to attempted first-degree intentional homicide. A deal with prosecutors calls for her to avoid prison, continuing treatment in a mental hospital instead.

A co-defendant, Anissa Weier, also admitted a role in the attack. Prosecutors say Weier and Geyser lured their classmate, Payton Leutner, into the woods at a park in the Milwaukee suburb of Waukesha and then attacked her. Geyser stabbed Leutner 19 times while Weier urged her on, according to investigators.

Leutner survived the attack by crawling out of woods, where she was found by a passing bicyclist. All three girls were 12 at the time.

"Anissa and I took [Leutner] in the forest and said that we were going to play hide and seek," Geyser said, crying. "Anissa said that she couldn't do it and that I had to."

When Judge Michael Bohren asked her how she attacked the girl, Geyser said, "I tackled her. I stabbed her."

After the attack, Geyser said she and Weier left the girl bleeding.

"Anissa told her to lie down so she wouldn't lose blood so quickly, and told her to be quiet, and we left," Geyser said.

Geyser's attorney Anthony Cotton said she is remorseful for the attack and wrote a "very powerful letter" of apology to the victim and hopes it can be delivered to her one day. Cotton said she wrote the letter without prompting from anyone.

Prosecutors asked a judge Thursday to sentence Geyser to 40 years in a mental hospital. As part of the plea deal, the judge accepted that Geyser is not guilty by reason of insanity, reports CBS affiliate WDJT.

Geyser will undergo a doctor's evaluation by Nov. 13, and a hearing for sentencing was to be scheduled later. The defense made no request for length of sentence.

A jury last month determined Weier was mentally ill at the time of the attack. She faces at least three years in a mental hospital when she is sentenced later.

Leutner's family issued a statement saying they were happy to avoid a trial.

"Though we do not believe that an institution is where these attempted murderers belong, the current legal system does not favor victims in this situation," the statement said.

It added: "With this closure, our daughter is a heroic survivor -- and no longer a victim."

Weier and Geyser told detectives they felt they had to kill Leutner to become Slender Man's "proxies," or servants, and protect their families from him.

Geyser's attorneys have argued in court documents that she suffers from schizophrenia and psychotic spectrum disorder, making her prone to delusions and paranoid beliefs. A psychiatrist hired by her attorneys testified that she believed she could communicate telepathically with Slender Man and could see and hear other fictional characters, including unicorns and characters from the Harry Potter and Teenage Mutant Ninja Turtles series. She also believed she had "Vulcan mind control."

Prosecutors initially charged both girls with attempted first-degree intentional homicide, which carries a possible sentence of up to 65 years in prison, but their plea deals spared them that. After Weier pleaded guilty to a reduced charge, a jury determined during her sentencing phase that she was mentally ill at the time of the attack and should not serve prison time.

Two weeks after the jury reached that conclusion, prosecutors and Geyser's defense attorneys agreed on a plea deal, avoiding a trial that was scheduled to start Oct. 16. Unlike Weier, Geyser pleaded guilty to the original charge.