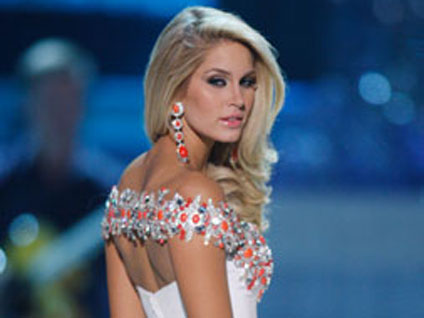 "Arizona's new immigration statute authorizes law enforcement authorities to check the citizenship of anyone they believe to be in the country illegally," Nunez began, but stopped short to address the audience.

"Listen to the question before you boo," he cautioned, before continuing, "Critics say this may amount to racial profiling. Do you think that this should be mandated by the state or by the federal government?"

Without a beat, Woolard answered that she's a "huge believer in state's rights," adding that she thinks that's "what's so wonderful about America."

She continued, "So I think it's perfectly fine for Arizona to create that law, and I'm against illegal immigration but I'm also against racial profiling so I see both sides in this issue."

The crowd's reaction alternated between supportive cheers and disagreeing jeers.

Woolard came in second place to Miss Michigan Rima Fakih, who is believed to be the first Arab-American to win the Miss USA title. Woolard was named the runner-up.

Watch Woolard's response and the audience's reaction below: