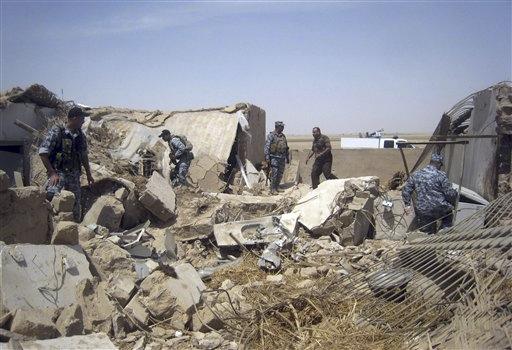 At least seven protesters and a policeman were killed Friday when security forces opened fire during the latest demonstrations to protest the alleged desecration of Islam's holy book by interrogators at the U.S. prison in Guantanamo Bay, officials and witnesses said.

The deaths brought to 15 the number killed in the biggest outpouring of anti-American sentiment since the fall of the Taliban in 2001 — a deepening worry for the government of U.S.-backed President Hamid Karzai.

Pakistan and Saudi Arabia — both U.S. allies — registered dismay over the allegations of Quran desecration, as did the 57-nation Organization of the Islamic Conference and the outlawed Egyptian Muslim Brotherhood.

But in Pakistan, a call for mass street protests from a coalition of hardline religious parties fell flat.

Unrest began in Afghanistan on Tuesday after Newsweek magazine reported in its May 9 edition that interrogators at Guantanamo Bay, Cuba, placed Qurans in washrooms to unsettle suspects, and in one case "flushed a holy book down the toilet."

Afghan officials said some of the protesters who took to the streets chanting anti-American slogans and stoning the offices of international relief organizations ignored the urgings of mullahs during Friday prayers to remain calm.

"This is organized by particular groups who are the enemies of Afghanistan," Interior Ministry spokesman Latfullah Mashal told The Associated Press. "They are trying to show that the situation, that security is not good."

In the southeastern city of Ghazni, witnesses said shooting broke out after protesters swarmed toward a police station and the governor's residence after Friday prayers chanting "Death to America" and pelting the buildings with rocks.

Shafiqullah Shafaq, a doctor at the city hospital, told AP that two civilians and a police officer were fatally shot and 21 people wounded, including the provincial police chief. The police official and seven others were brought to Kabul for treatment, Shafaq said.

Majid said the mob set fire to the office of Focus, a reconstruction agency funded by the Aga Khan Foundation of the spiritual leader of the world's 20 million Ismaili Muslims, and a British aid group.

Another man was killed in the northwest when police opened fire during a demonstration after prayers in Qala-e-Naw, capital of Badghis province, provincial police chief Amir Shah Naibzada told AP.

Four demonstrators suffered bullet wounds in a clash with police and government troops in Gardez, near the Pakistani border, and one died later in hospital, provincial police chief Hay Gul Suleyman Khel said.

A protest in Kabul ended peacefully.

The crackdown on the first major protest in Jalalabad on Tuesday that left four people dead has enflamed passions further, and demonstrations — many of them violent — have taken place in at least 10 towns and cities.

Many of the 520 inmates at Guantanamo are Muslims arrested during the U.S.-led war against terror in Afghanistan. In both Afghanistan and Pakistan, insults to the Quran and Islam's prophet, Muhammad, are regarded as blasphemy and punishable by death.

U.S. officials, including U.S. Secretary of State Condoleezza Rice, have promised to investigate the allegations, saying disrespect for the Quran would never be tolerated.

"Respect for religious freedom for all individuals is one of the founding principles of the United States," Rice said Thursday in Washington.

At the Pentagon, Gen. Richard Myers, chairman of the Joint Chiefs of Staff, said U.S. commanders in Afghanistan believe that local political factions — and not the alleged desecration — are driving the violence.

Myers said the military is investigating the allegation but so far has not been able to confirm it.

But in the main cities of Islamabad, Lahore, Peshawar, Quetta, Multan and Karachi no more than a few hundred turned out, despite fiery rhetoric from some preachers.

There were no reports of violence, although in Quetta, protesters burned an effigy of U.S. President George Bush.

"We think President George Bush has started a crusade war by insulting (the) Quran," hardline cleric Anwar ul-Haq told a congregation there. He warned that people would be forced to take "extreme steps against American citizens in the world" if there there was another such incident.

But Sadique Bajrani, a cleric in Karachi, urged people to remain peaceful. "Americans did a bad thing, but you should not hurt anyone while protesting against America," he said.

During a visit to Australia, Pakistani Foreign Minister Khursheed Kasuri called the alleged slur against Islam's holy book "debased, inhuman (and) depraved," and said the Bush administration should take "very strong action" to investigate the incident and punish those responsible.

Saudi Arabia has also urged that any offenders be quickly disciplined.

The Saudi-based Organization of the Islamic Conference said it had written to Rice urging a strong response.

In the first hint of unrest in Southeast Asia, about 50 people protested outside three hotels in the eastern Indonesian city of Makassar, demanding they hand over any Americans inside. The demonstrators were blocked from entering the hotels and it wasn't clear if there had been any American staying there, witnesses said.

The outlawed Muslim Brotherhood, Egypt's largest Islamic group, claimed the alleged desecration of the Quran was "a link in the series of aggressions on the Islamic sanctities."