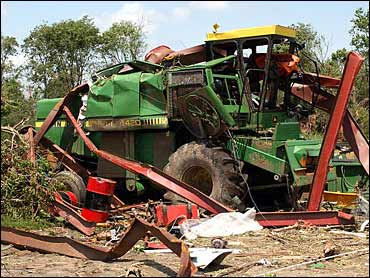 In Minnesota, a tornado hit Buffalo Lake, and a dispatcher with the Renville County Sheriff's Department said there were minor injuries. Emergency crews were doing a house-to-house check to look for more victims.

"The (farmers) elevator's busted up, power lines are down, the whole city got hit. The whole north side of the roof of Zion Lutheran Church is gone," said Buffalo Lake City Council member Douglas Rath.

"It was huge, it was humongous," a Buffalo Lake resident told CBS News. "I've never seen a tornado that close, and I don't ever want to see one again."

Authorities also reported a tornado touched down near Kandiyohi. Both towns are located about 70 miles west of Minneapolis.

Strong thunderstorms battered much of eastern South Dakota, where tornado warnings were issued. The town of Manchester was "virtually leveled," said a spokesman for Gov. Mike Rounds. Homes and buildings were gone and streets were torn up, but no injuries were reported.

It was not immediately clear if the damage was caused by a tornado.

Authorities in Nebraska reported several tornadoes Tuesday night, including three in Rock County in the north-central part of the state.

Trees and power lines were downed and a barn damaged. No injuries were reported.

Two deaths from tornadoes have been reported in Nebraska this week. On Monday, a tornado struck Coleridge in northeastern Nebraska, killing a man. On Sunday, storms spawned twisters in the southern part of the state. One man died in Deshler.

The two deaths in Nebraska this week are the first tornado fatalities in the state since 1988.