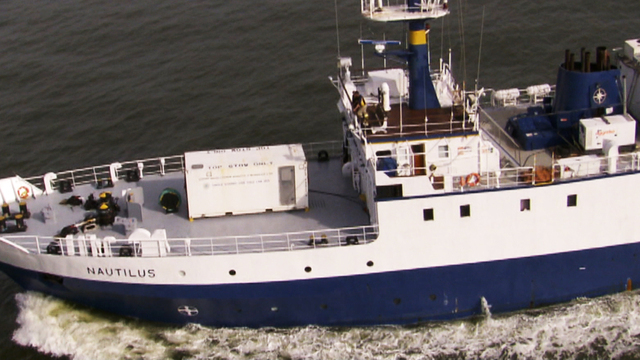 Unexplored battlefields and untapped natural resources are some of the treasures off America's shores that explorer Robert Ballard says will make for many eureka moments in the future. Ballard, who discovered the Titanic 30 years ago, takes Lara Logan and 60 Minutes cameras on an underwater adventure to see some of them on the next edition of 60 Minutes, Sunday, May 10 at 8 p.m. ET/PT.

Ballard calls the 200 nautical miles stretching out from U.S. coasts the "unknown America." There's as much sea bottom as there is dry land and it's a surprise to most, he says. "If you ask someone how much of the United States lies beneath the sea, they may say, 'Five percent or 10 percent.' And when you tell them that half of their country lies beneath the sea and is unexplored, they don't believe you," says Ballard.

Ballard is committed to exploring this underwater America for the rest of his life and if his past is prelude, there is much to find. "The most important discoveries were the ones I didn't know were there," he says. "I can only tell you that we've looked at so little, there has to be huge discoveries still waiting for us," he tells Logan.

On the trip he took Logan on in the Gulf of Mexico, he used the remote-controlled deep sea vehicle Hercules, which can descend more than two miles underwater, and a companion submersible with lights. They saw the Robert E. Lee, an American passenger ship that had been torpedoed by a Nazi sub and went down, taking 25 people with her, in 1942. "Most people don't realize during WWII, German U-boats were sitting right where we are now, sinking American ships," says Ballard. A few miles away and nearly a mile deep, they came upon the U-166, the sub that did the deed. It had been dispatched by U.S. Navy depth charges.

The expedition unexpectedly uncovered another much larger and modern naval wreck less than a hundred miles off Louisiana; its identity will be revealed on Sunday's broadcast.

The 72-year-old Ballard sails aboard the Nautilus, a 211-ft. exploration vessel partially supported by the U.S. government. There's one more the U.S. employs to do the kind of non-commercial exploration Ballard is doing: the Okeanos Explorer. Are they enough for such a monumental task? "They're the only two official ships of exploration the federal government has. I'd like to have 20, but I'll go for two," he says, "It's better than zero, which was just a few years ago."

Anderson Cooper plugs in to mindfulness
Thanks for reading CBS NEWS.
Create your free account or log in
for more features.
View CBS News In
CBS News App Open
Chrome Safari Continue
Be the first to know
Get browser notifications for breaking news, live events, and exclusive reporting.