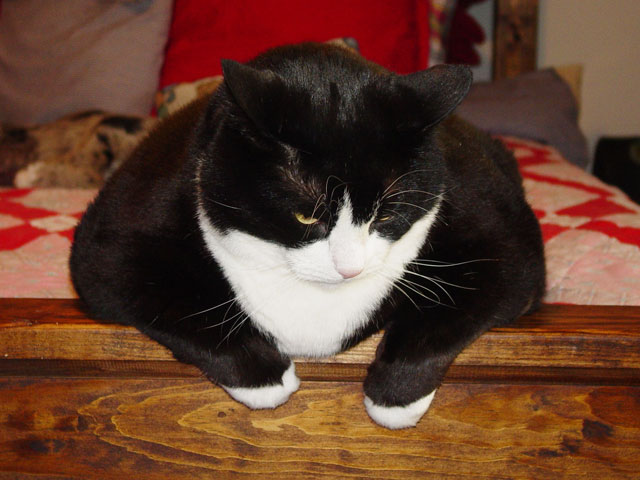 (CBS) American people aren't the only ones with an obesity problem. A new survey shows 54 percent of our nation's pets are overweight or obese.

That's 88.4 million cats and dogs, according to the survey of veterinarians by the Association for Pet Obesity Prevention. The survey found that 53 percent of adult dogs and 55 percent of cats are classified as overweight or obese.

"The most distressing finding in this year's study was the fact that more pet owners are unaware their pet is overweight." APOP founder Dr. Ernie Ward, said in a written statement. Fifteen percent of cat owners and 22 percent of dog owners said their pets were "normal weight" when the vets and scales said otherwise, what Ward calls the "fat pet gap."

"In simplest terms, we've made fat pets the new normal," he said.

But despite all this, the survey found 93 percent of pet-owners say they realize animal obesity is a problem. Why are we making our pets so fat?

Dr. Rene A. Carlson, president of the American Veterinary Medical Association, told HealthPop that she's been in practice for 34 years, and the problem seems to be more prominent in the last 10 years, similar to the situation in humans.

Besides a lack of exercise - especially in the case of dogs - what we're feeding our pets plays a big role in the pet obesity epidemic.

Ward said commercial animal treats are a major contributor to pets' weight gain because they are often loaded with calories. According to the survey, a typical dog biscuit fed to a 20-pound dog is the caloric equivalent of a human eating two double-stuffed fudge cookies. Feeding a 40-pound dog a pig ear is akin to a human drinking six 12-ounce cans of soda.

Carlson told HealthPop that table food is also a big culprit. People may not realize all the diseases overweight animals are likely to get. Common disease risks include osteoarthritis (in the elbows for cats, which is especially painful), diabetes, high blood pressure, breathing problems, kidney disease, and a shorter life expectancy.

"It is very frustrating to see how much pain and discomfort excess weight has on my patients," Dr. Steve Budsberg, director of clinical research at the University of Georgia College of Veterinary Medicine and APOP board member said in the statement. Budsberg says he sees the suffering daily, so pet-owners need to step up and stop pet obesity. "No animal goes to the refrigerator or the pantry and helps themselves," he said.

Carlson agreed. "We could keep many pets we see in middle and old age off of expensive pain medications if they got the weight off," she said.

She said overweight pets frequently suffer lesser-known conditions, such as nasty skin infections because fat folds prevent the animal from cleaning itself. A major problem she sees weekly that is the "most feared disease in my practice," is pancreatitis, an inflammation of the pancreas. A big cause of this is table food, she said, especially around holiday times when people give their pets fatty foods like leftover gravy, or turkey and ham skin. The problem sometimes is not noticeable until it's too late and the pancreas leaks digestive acids, causing great pain or even death.

Carlson, a pet-owner herself, concedes people love their pets more than ever before which is why the pets receive these treats, but she's seen the downsides of pancreatitis and pet obesity on a weekly basis, so she never feeds her dogs table food.

"You're killing your animals with love," Carlson warned pet-owners.

What's the best way to get pets to lose weight?

Carlson said it's "never too late," and recommends that any pet-owner with questions about their animal's weight should see a veterinarian. A vet can give the animal a body condition score - similar to how humans have a BMI score - and design a feeding plan. Sometimes the vet will also put the animal on emergency medications or diet if their weight is life-threatening.

All kinds of pets are different and metabolize food differently, she said, which is why the vet is the best option, as opposed to online calculators.

Visit www.myveterinarian.com to find a vet in your area.