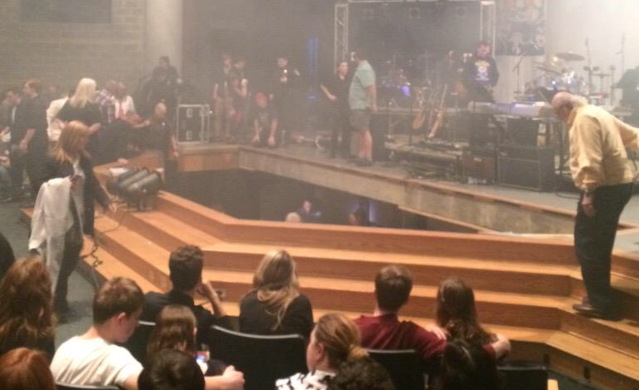 Capt. Charles Hollowell of the Westfield Police Department said all of the injuries the students suffered in the collapse Thursday evening were minor, and that they are "doing really well," including one who initially was reported in critical condition. No fatalities were reported.

Authorities say a large group of students was on the stage during the grand finale of the "American Pie" concert at Westfield High School when the floor of the stage collapsed into the orchestra pit below.

Nicole Gruszka was the lead singer on the stage when it happened. She recounted her experience to CBS Indianapolis affiliate WTTV.

"I had just stepped forward onto the steps right off of the orchestra pit when I heard a crash mid-note," she said. "I looked back and the floor had fallen and everyone was in the hole. I immediately knew it wasn't a part of it because we had been rehearsing for so long. I knew the audience was confused, but I knew right away and I just didn't know what to do so I just froze."

Westfield Washington Schools Superintendent Mark Keen said the school was gathering records related to the stage for investigators to scrutinize. Keen says it appears that a cover that is placed over the orchestra pit for some productions gave way, causing the collapse.

Indiana Gov. Mike Pence is promising a thorough state investigation into the incident.

Regularly scheduled classes will meet Friday and Keen said faculty would come in early to work with students as they arrive.

Video posted to Twitter by Zach Rader - who was in the audience - and consistent with the AP's reporting shows more than a dozen students dancing and clapping on stage while a female student sings along to Journey's "Don't Stop Believin'."

Most students then suddenly plummet out of sight, the music cuts off and screams are heard.

Blake Rice, an 18-year-old senior at the school about 20 miles north of Indianapolis, said he was playing guitar in the performance, a tribute to '80s music.

As the last song began, Rice said he took a step back to allow more students onto the stage. He saw the stage collapse but did not fall through.

"At first, it didn't seem real. It didn't really register with me what happened," Rice said.

Rice said people in the audience immediately ran toward the stage and began pulling debris off students. Auditorium staff pulled people out of the pit, he said.

"I realized how lucky I was," Rice said. "Another 3 seconds and that could have been me."

Westfield Mayor Andy Cook said he visited with some of the injured students at hospitals after the collapse.

"I said, 'You kids must have been really rocking,'" he recalled.

The incident evoked memories of a 2011 stage collapse at the Indiana Stage Fair that killed seven people and injured nearly 100. High winds toppled rigging and sent the stage roof onto fans awaiting the start of a concert by the country duo Sugarland.

The school's principal, Stacy McGuire, tweeted about the incident. Among her messages: