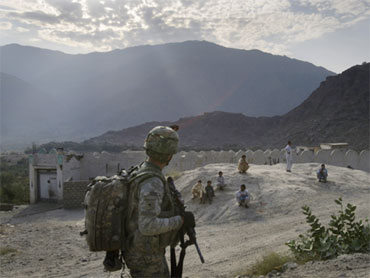 On Friday a NATO spokesman said more than two dozen members of NATO and Afghan security forces were wounded in western Afghanistan, near where coalition forces were searching for two missing U.S. paratroopers.

NATO said an exhaustive search and rescue operation is continuing, and that it is unlikely the two were taken captive. Local police say they were swept away by a river.

"We continue exhaustive search and rescue operations to locate our missing service members," spokeswoman Navy Capt. Jane Campbell said in the statement. "We are doing everything we can to find them."

Their families have been notified, and no further information will be released while the rescue operation continues and the incident is being investigated, the statement said.

Earlier reports suggested more than 25 NATO and Afghan security forces members were wounded during the search and rescue mission. However, Abdul Jabar, Chief of Security for Badghis Province, told CBS News that the wounded service members were not involved in the search but were in a firefight in the general area that began about 1 p.m. local time.

No other confirmation of this report was available. He said no further information could be expected tonight because it is an area where the mobile phone network shuts down after 5 p.m. due to Taliban pressure.

Military officials, who spoke on condition of anonymity due to command policy, indicated that they did not suspect the case of the missing paratroopers was similar to that of an American soldier who was captured by insurgents in eastern Afghanistan on June 30.

Western regional police Chief Gen. Ikram Uddin Yawar said two American soldiers were swept away by a river while trying to save two boxes that had fallen into the water while being airdropped during a resupply mission in the Bala Murghab district of Badghis province.

Jabar said a helicopter had airdropped food parcels at a coalition base, but that strong winds had blown one box into the river and that two soldiers had been swept away by strong currents while trying to recoup the parcel. He said Afghan police had been helping coalition forces in the search Thursday and Friday but had been unable to find the two soldiers.

NATO could not confirm whether the missing paratroopers had been swept away by a river, and said it could release no further details.

The soldier who disappeared on June 30 near Afghanistan's border with Pakistan has still not been found. He was shown as a Taliban captive in a propaganda video in July. U.S. military officials have said little about the search for 23-year-old Pfc. Bowe R. Bergdahl for safety reasons, and it is unclear whether he is being held in Afghanistan or Pakistan.

The deaths bring to three the number of U.S. service members killed in the Afghan war so far this month. October was the deadliest month of the eight-year war for U.S. forces with 59 deaths reported.