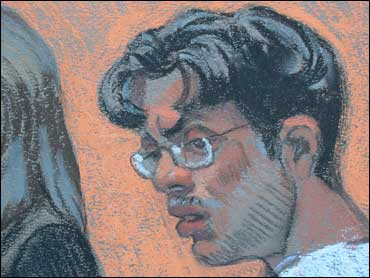 
Two American men linked to 17 Canadians charged with terrorism offenses allegedly plotted to attack a U.S. military base north of Atlanta, and trained for "violent jihad" by playing paintball in north Georgia, according to a new indictment announced Wednesday.

The American pair also conspired with an alleged terrorist operative in England who ran "jihadist" Web sites, according to the indictment.

New details of the reputed international conspiracy were revealed in a superseding indictment brought by federal prosecutors in Atlanta against the two, both of whom are U.S. citizens already in custody. Sayed Haris Ahmed, 21, is a naturalized American from Pakistan, and Ehsanul Sadequee, 19, is a Virginia-born citizen of Bangladeshi descent.

The four-count indictment accuses both men of conspiring to provide and providing material support to terrorists, but no specific terrorist organization is named. Each count carries a maximum sentence of 15 years.

Read the indictment (13 pages).Ahmed, who studied engineering at Georgia Tech University and lived in Atlanta, has been detained in Georgia since he was originally indicted in March. Sadequee has been detained in New York since April following his arrest and transport from Bangladesh. Now formally indicted, he is expected to be transferred to Atlanta to face trial.

Before Wednesday's indictment, U.S. prosecutors had said Ahmed and Sadequee and underwent "military-style training exercises" and made "casing videos" of possible targets including the Capitol and the World Bank headquarters in Washington and a Masonic Temple and fuel storage tanks in northern Virginia.

The indictment alleges they sent those videos to Younis Tsouli, a 22-year-old Londoner charged last year by with terrorism offenses in the United Kingdom, where he remains in pretrial detention. His computer contained videos showing how to make car bombs and guns silencers, according to the charges.

In addition to the Washington-area targets, according to the superseding indictment, Ahmed and Sadequee considered attacking Dobbins Air Reserve Base in Marietta, Ga., an Atlanta suburb.

"The indictment does not allege that these defendants had proceeded to the point that they posed an imminent threat to the United States. But in today's world, we no longer wait until a bomb is built and ready to explode. The fuse that could lead to an explosion may be long, but once it is lit, we will use criminal prosecution — and any other tool that the law provides — to put it out," U.S. Attorney David Nahmias said in a written statement.

Prosecutors previously said a month before their surveillance of targets, in March 2005, Ahmed and Sadequee met with "like-minded extremists" in Toronto. Sadequee, who went to high school in Canada, was initially accused only of lying to the FBI agents about that trip.

Canadian authorities accused 17 men in June of conspiring and training to attack the Canadian Parliament building, take politicians hostage, and behead them "one by one at specified times" until the government agreed to withdraw troops from Afghanistan and free Muslim prisoners at home. The Toronto 17 later allegedly plotted to truck bomb Canadian government buildings using ammonium nitrate fertilizer as an explosive.

According to the Canadian charges, Ahmed and Sadequee had visited one of the accused ringleaders of the Toronto group, Fahim Ahmad, and suspect Jahmal James, who allegedly attended to a militant camp in Pakistan last November.

The U.S. indictment says Ahmed and Sadequee sought training in such camps in their travels to Pakistan, "to engage in violent jihad in Kashmir or elsewhere, with the goal of joining Lashkar-e-Tayyiba," which the United States has designated a foreign terrorist group. Neither suspect succeeded in attending a camp or a religious school, according to the indictment.

When first questioned by the FBI last summer, Ahmed denied any nefarious intentions, but then divulged the details in more than 12 hours of interviews over five days, according to court documents. Between his denials and his confessions, Ahmed worried about government surveillance, according to the indictment. He told one cohort he feared his telephone calls were wiretapped and another to read the indictment of alleged al Qaeda operative Jose Padilla, who faces charges of engaging in a terrorism conspiracy with others in south Florida based largely on hundreds of wiretapped phone calls.