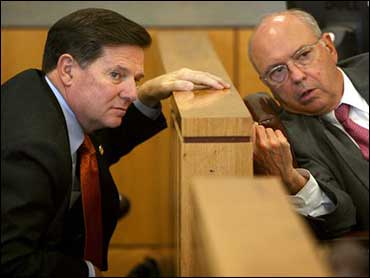 A Texas grand jury asked Thursday for all e-mail sent and received in 2002 by three indicted associates of U.S. Rep. Tom DeLay as part of an investigation into an alleged campaign finance scheme.

The latest subpoenas request correspondence to and from e-mail addresses belonging to John Colyandro, Jim Ellis and Warren RoBold. The grand jury did not ask DeLay to provide e-mails.

Prosecutors allege that DeLay and his associates funneled corporate money given to the Texas committee to an arm of the Republican National Committee, which sent it back to seven GOP candidates for the Texas Legislature. Texas law prohibits corporate money from being used directly in a political campaign.

Among the information being requested, the grand jury seeks records from DeLay's political committee in Texas, including billing information and subscriber and recipient details.

The grand jury also repeated a request for telephone records from DeLay's daughter, Danielle DeLay Ferro, a political consultant who did work for DeLay's Texas committee.

"It's interesting that they're trying to find evidence at this late date," said Ellis' attorney J.D. Pauerstein, who filed motions Thursday to get the charges against his client dismissed.

Travis County District Attorney Ronnie Earle, who conducts the grand jury, did not comment on the latest subpoenas.

The officials may be asked to testify at a hearing Tuesday to decide whether state District Judge Bob Perkins should continue to preside over DeLay's case. DeLay wants the judge removed because of contributions Perkins has made to the Democratic candidates and causes.

On Wednesday, DeLay notified House officials that he failed to disclose all contributions to his legal defense fund as required by congressional rules.

DeLay wrote House officials that he started an audit and it found that $20,850 contributed in 2000 and 2001 to the defense fund was not reported anywhere.

An additional $17,300 was included in the defense fund's quarterly report but not in DeLay's 2000 annual financial disclosure report — a separate requirement. Other donations were understated as totaling $2,800 when the figure should have been $4,450.

The Texas Republican, who has stepped down as majority leader due to felony indictments in the Texas probe, disclosed and corrected the past reporting mistakes.

The defense fund will soon report to the House that it received $318,000 in the third quarter of this year — the best fundraising quarter since it was started in June 2000, according to the trustee, Houston attorney Brent Perry.

On Oct. 13 DeLay wrote the clerk of the House, Jeff Trandahl, that the first inkling of inconsistencies in his disclosures came last February.

"I brought this matter — which I discovered on my own — to the attention of the Committee on Standards of Official Conduct to alert the chairman and ranking member," DeLay said in his letter.