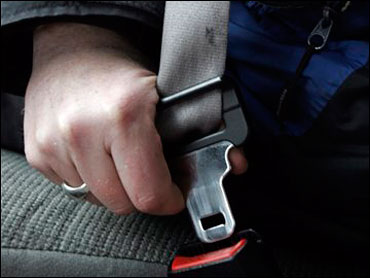 Drivers better buckle up or pay the price: More cash-strapped states want to give law enforcement officers the authority to pull over motorists just for not wearing their seat belts.

More than a dozen states that are considering making the switch to primary seat-belt enforcement laws need to do so before July to be eligible for millions in federal money.

One of those states is Ohio, which would get $26.8 million if it changes its law. Currently, officers in the state must first have some other reason to stop drivers over before issuing seat-belt citations.

States without primary seat-belt enforcement that want the federal money must pass a bill and have it signed by the governor by June 30 - and begin issuing citations by Sept. 30 - to qualify for federal funds, according to the National Highway Traffic Safety Administration. The federal money attached to seat-belt enforcement can only be spent for highway-related projects.

Twenty-six states and the District of Columbia already have primary seat-belt enforcement laws, meaning police can stop a vehicle for a seat belt violation, even if this is the only violation the officers notice.

Ohio faces a $7.3 billion projected budget deficit over the next two years compared to current funding levels, leading Strickland to propose 120 fee and fine hikes, payroll reductions for state employees, and the delay of debt payments into future years.

A 2008 report by the National Highway Traffic Safety Administration said states with primary enforcement seat belt laws are averaging about 13 percentage points higher for seat belt use - 88 percent - than states with secondary enforcement laws - 75 percent. Ohio, however, has a seat-belt usage rate of nearly 83 percent.

Congress adopted the federal incentive program in the 2005 federal transportation bill as a way to encourage states to adopt the primary enforcement law. The goal was to save lives, reduce insurance costs, and cut medical bills.

The traffic safety agency found that in 2007, 54 percent of passenger vehicle occupants killed in traffic accidents were not wearing seat belts.

Still, the proposed change faces obstacles in states like Ohio, where many Republicans - who control the Senate - oppose it because of libertarian philosophies.

"People ought to be able to decide whether they want to drive 75 mph without their belt on," said House Minority Leader Bill Batchelder, a Republican from Medina.

And some lawmakers are hesitant to hand police more authority to stop motorists, believing that would lead to violations of Fourth Amendment protections against illegal search and seizure, Batchelder said.

"I would say some will be more willing to look at it," he said.

Also, lawmakers in Georgia - the only state in the nation to specifically exempt adults in pickups from buckling up - are considering changing that law, prompted in large part by their budget woes.

Only New Hampshire still has no seat belt requirement for all adult drivers, costing that state $3.7 million in grants in 2007.

In Arkansas, the sponsor of a primary seat-belt enforcement bill is attempting to allay the concerns of civil rights advocates that the change would lead to more racial profiling.

Sen. Hank Wilkins IV, of Pine Bluff, has said he will introduce a separate bill requiring some law enforcement agencies to collect data on motorists pulled over for not wearing a belt.