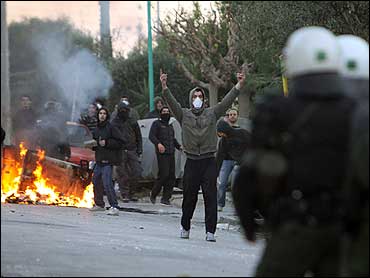 Riot police fought running battles with mourners Tuesday after the funeral of a teenager whose shooting by officers set off waves of rioting that have sent Greece's already unpopular government reeling.

The government has a single-seat majority in the 300-member Parliament and opposition parties blame hands-off policing for encouraging the worst rioting the country has seen in decades.

"The government cannot handle this crisis and has lost the trust of the Greek people," Papandreou said. "The best thing it can do is resign and let the people find a solution ... we will protect the public."

High-school and university students joined elements of mostly left-wing and self-styled anarchist groups to rampage through the capital and several other cities overnight. Gangs of masked youths roamed the streets erecting burning barricades and pelting riot police with rocks and bottles.

Meanwhile, Greece's two largest labor unions said they will push ahead with demonstrations in riot-ravaged Athens as part of a 24-hour strike Wednesday to protest the government's economic policies.

Greece's transport will grind to a halt Wednesday as flights and ferry links will be cut and train service severely limited.

On Tuesday, police fired tear gas to dispel dozens of youths throwing stones and sticks and setting trash cans on fire near the funeral for 15-year-old Alexandros Grigoropoulos, whose death Saturday sparked the rioting. Dozens of local residents gathered on the streets, shouting at police to stop firing gas in the residential area.

Some 6,000 people attended the funeral, applauding as the body was carried out of the church in a flower-covered white coffin.

Schools and universities across Greece were closed and hundreds of teachers, university lecturers and students rallied in central Athens, where hundreds of teenagers threw rocks and scuffled with officers. Fighting also continued in Thessaloniki.

"Everyone has let our children down ... Every day I see that students are becoming more hostile toward us and figures of authority," said Christos Kittas, who resigned as the dean of Athens University after the rioting spread to campuses.

Tension between security forces and leftist groups is deeply rooted in Greece, dating back to the seven-year military dictatorship that was toppled by a student uprising in 1974.

The groups have now evolved into various factions that claim to fight trends ranging from globalization to the growth of police surveillance cameras.

Their impact is usually limited to graffiti and late-night firebomb attacks on targets such as stores and cash machines.

But the latest riots have besieged the administration of Prime Minister Costas Karamanlis, who has faced a wave of discontent and sometimes violent demonstrations over policies including unpopular reforms to the country's pension system, privatizations and loosening state control of higher education.

"It's very simple - we want the government to fall. This boy's death was the last straw for us," Petros Constantinou, an organizer with the Socialist Workers Party, said after a protest in central Athens. "This government wants the poor to pay for all the country's problems - never the rich - and they keep those who protest in line with police oppression."

Even if the opposition Socialists were to come to power, they would find themselves faced with pressure to reform the economy and pensions.

Police said rioters damaged or destroyed 200 stores and 50 banks in Athens overnight, while 20 buildings were damaged by fires, including downtown hotels that were temporarily evacuated late Monday. A further 100 stores were damaged in Thessaloniki.

There was also rioting in Crete, the holiday island of Corfu, and in other areas around Greece.

Riot police used tear gas when attacked by youths but stood back as they smashed windows and torched stores along Athens' main commercial streets.

Greece's interior minister insisted police had successfully protected human life, and Karamanlis said there would be no leniency for rioters.

On Tuesday, the Bank of Greece announced a 12-month delay on interest payments for loans by shopkeepers affected by the rioting. But the Athens Traders Association encouraged its members to sue the government, saying police had failed to protect them.

The circumstances surrounding Grigoropoulos' shooting are unclear, but the two officers involved have been arrested; one has been charged with murder and the other as an accomplice. A coroner's report shows the boy was shot in the chest.