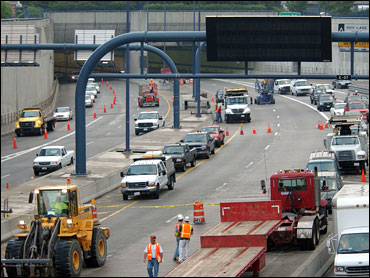 Gov. Mitt Romney shut down the eastbound Ted Williams Tunnel on Thursday after two problem bolts were spotted during inspections following the deadly collapse of ceiling panels in a nearby stretch of the city's Big Dig highway system.

Romney said he had been shown disturbing photographs of problems in the tunnel after state engineers had found two that appeared to have slipped ½ inch and 1 inch in one ceiling panel.

"It is perhaps an overreaction but we want to err on the side of public safety," Romney said at a news conference in which he was overruling an earlier finding by the Massachusetts Turnpike Authority that the tunnel was safe.

Romney said he expected the shutdown to last a matter of hours, not days.

The connector tunnel, a stretch of Interstate 90 that leads to the Ted Williams Tunnel, was shut down immediately, and inspections found hundreds of problems with bolts holding its ceiling panels in place. Two of the identified problems provide a significant threat to public safety, Romney said. Both of the problems he called significant are in the eastbound lane of the tunnel.

The eastbound Ted Williams Tunnel, opened in 1995, runs under Boston Harbor to Logan Airport. It was also closed to the general public after the nearby collapse but buses had been using it to reach the airport.

After the collapse, engineers conducted "pull tests" on the ceiling panels in the connector tunnel and a tunnel ramp and found hundreds of bolts secured with epoxy that were unreliable.

The ceiling panels in the Ted Williams Tunnel are secured with a different system, and they weigh much less, about 800 pounds each compared to 3 tons.

But Romney said Thursday that he was still concerned after the two problem bolts were found. A truck was brought in to shore up the ceiling. He said engineers were working to come up with plan to reinforce the panel and allow traffic to pass.

The underwater portion of the 1.6-mile Ted Williams Tunnel is three-quarters of a mile long. It was built using a dozen steel tube sections, each longer than a football field. The sections were sunk into a trench on the Boston Harbor floor.

The $14.6 billion Big Dig buried the old elevated Central Artery under Boston. Although it's been considered an engineering marvel, the most expensive highway project in U.S. history also has also been plagued by leaks, falling debris, cost overruns, delays and problems linked to faulty construction.

Attorney General Tom Reilly has launched a criminal investigation into last week's collapse and is considering whether involuntary manslaughter charges are warranted. His inspectors are focusing on how the concrete panels were designed, whether they were secured properly for their weight and if they were tested properly.