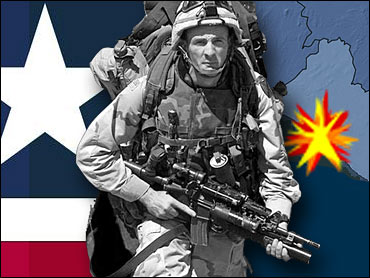 The number of malaria cases among U.S. Marines serving in Liberia rose again Thursday, with 51 showing symptoms of the illness, defense officials said.

Five new patients were identified with mild cases and were treated aboard the USS Iowa Jima rather than evacuated out of the region, officials said.

Navy doctors are investigating what they say is an unusually high rate of the illness among service members who were in Liberia only briefly last month on a peacekeeping mission, then returned to a three-ship amphibious group offshore.

The 51 sickened represent almost a fourth of some 225 who went ashore to help West African peacekeepers last month. They include an Army soldier, three sailors and one civilian, with the rest Marines.

Twenty of the 41 evacuated to the states have been discharged from the hospital and are under outpatient care. Six of eight treated on the Iwo Jima have returned to duty and two remain at the Landstuhl Regional Medical Center in Germany, Pentagon officials said.

U.S. troops normally receive an anti-malarial drug regimen before deploying to a country like Liberia where there is risk of getting the disease.

Doctors are looking into three possible reasons for the outbreak: The strain of malaria troops got has become resistant to the drug they took; troops didn't take the drug correctly; or the drug had gone bad or been manufactured incorrectly.

Malaria is transmitted by mosquitoes that breed in stagnant water and tall grass.

The disease kills 3,000 children a day in Africa and robs the continent of millions of dollars in lost productivity, the United Nations said in a report early this year.

The mosquito-borne disease infects 300 million people a year in the poorest continent and has become increasingly resistant to drugs, said the World Health Organization and the United Nations Children's Fund, UNICEF. Yet there are ways to control the disease, they said.