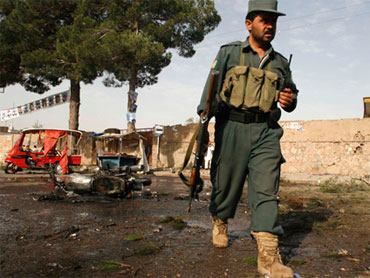 Stocks around the world plunged on persistent interest rate worries Monday, sending the Dow Jones industrials down more than 140 points and below 10,000 for the first time since December.

It was Wall Street's third straight day of heavy selling, gathering momentum in this latest decline from steep losses on markets around the world.

The main Japanese average, the Nikkei, sunk nearly 5 percent, setting the tone for a difficult day on U.S. markets.

Equity traders were rattled by Friday's employment report from the Labor Department — the U.S. gained 288,000 new jobs in April — and feared the news would prompt the Federal Reserve to raise interest rates as early as next month.

"Of course, psychologically, Dow 10,000 has some short-term effects on the market," said Stuart Freeman, chief equity strategist for A.G. Edwards & Sons. "Long-term, the markets still look at corporate fundamentals, earnings, that sort of thing. But we do have some inflation and interest rate fears in play which could keep things lower, at least for now."

Wall Street has been gripped by a spasm of selling for four weeks as economic indicators grew more positive and investors worried that corporate profits would be eroded by an ensuing series of interest rate hikes.

When inflation — a general rise in the price level — threatens, the Federal Reserve raises interest rates to cool down spending. Higher rates make it more expensive for businesses to borrow money.

The Fed last week held a main short-term interest rate at a 46-year low in an attempt to keep the economy humming.

But Fed Chairman Alan Greenspan and his Federal Open Market Committee colleagues dropped a pledge that they had made at their previous meetings this year to be cautious about ordering any future rate increases. Economists viewed that as another move by the Fed to begin to prepare Wall Street and Main Street for an eventual rate increase.

The latest Consumer Price Index report, a key measure of inflation, is due on Friday.

There may be some relief in sight at the gas pumps, as Saudi Arabia's oil minister Monday called on other oil producing nations to increase production.

The announcement by OPEC's largest producer comes only days after U.S. crude oil prices briefly topped $40 a barrel and average U.S. gasoline prices have been pushing to their highest level in more than a decade. OPEC pumps about a third of the world's oil.

"It is certain that the kingdom believes that increasing the OPEC production ceiling is essential to keep supply and demand balanced," Saudi oil minister Ali Naimi said Monday in a statement. He said the increase should "not be less that 1.5 million barrels a day."