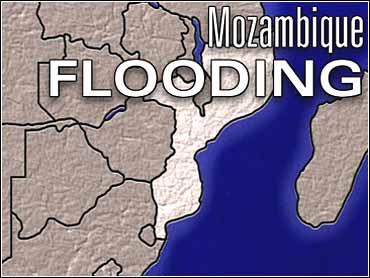 About 400,000 people have been affected by floods that began early this year in this impoverished southeast African country. More than 75,000 people have lost their homes and 41 have died, according to official figures.

The state-owned newspaper Noticias reported Monday that more than 50 had died.

Rains continued to fall in central and northern Mozambique on Tuesday.

The government launched an appeal last week for $30 million in emergency flood aid.

The waters of the Zambezi River flooded low-lying areas of Tete city Tuesday after more floodgates were opened Monday night on the Cahora Bassa Dam.

Tomas Mandlate, governor of Tete province, said people in the city were panicking.

"The situation is now alarming and we fear this disaster will be similar to that of 1978," he told state radio Monday night.

The 1978 flood, during which eight Cahora Bassa dam floodgates were opened, caused about $60 million worth of damage and affected some of Mozambique's most fertile land.

Mozambique is still recovering from floods last year that killed more than 700 people and destroyed roads, houses and farmland across the southern and central parts of the country.

The Cahora Bassa dam now has four floodgates open and officials worried they may have to release more water. They said the situation was critical for the dam, but they were trying to release water slowly to prevent a catastrophe in the Zambezi basin.

Even more water is headed Mozambique's way from the Kariba Dam, which is jointly managed by Zambia and Zimbabwe. Heavy rains have swelled the lake behind the dam, one of Africa's biggest, and forced officials to open more floodgates.

Mounting pressure on the 420 foot dam wall risked cracking its supports and even collapsing the wall, Zambia's Deputy Energy Minister Celesto Chibamba said Tuesday. That could unleash a massive wave that could sweep away whole communities downstream, he added.

Two of the six flood gates already have been opened. Mozambique had asked Zambia not to open the other four gates fearing worse flooding along the Zambezi River, Chibamba said.

The additional water from the Kariba Dam may force the opening of even more floodgates in the Cahora Bassa Dam downstream.

In Malawi, officials are battling an outbreak of the waterborne disease cholera that has killed at least 20 people after flooding in eastern and southern parts of Malawi that border Mozambique, officials said Tuesday.

The Vatican's missionary news agency Fides said five Malawians had drowned, while in Zambia two people had died and 15,000 people were left homeless by flooding.