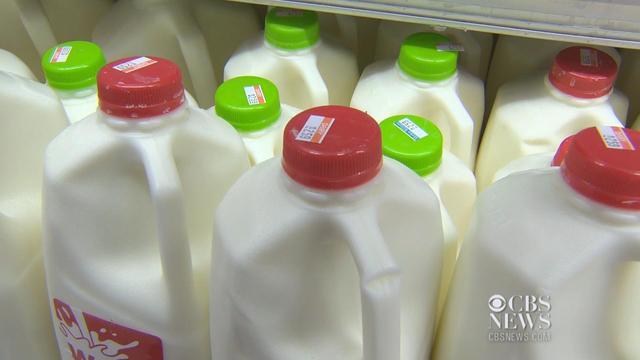 Milk is no longer something you'll find in every American refrigerator. The average consumption of dairy milk has dropped from about 22 gallons a year per person in 1970 to less than 15 gallons in 2012. That's a 33 percent decline.

Scientists agree that calcium is an essential mineral to keep bones strong and healthy, but milk may not be the best delivery system for everyone. There is a lot of conflicting information about what additives may be in some dairy products and what effect they may have on us. Some dairy cows are treated with hormones to help them produce more milk. In addition, many farms use antibiotics to treat infections of the udder, or mastitis, although the USDA requires testing to keep milk with traces of antibiotics out of the food supply.

While the industry says there's no evidence these practices are harmful to our health, many families are simply saying no to cow's milk. Mother of two Rosemary Hochberg believes plant-based milks like soy, almond and rice are healthier options for her family.

"We're the only mammals that consume milk as an adult, and the milk is from another mammal. That in itself as a concept, it's a little strange," she told CBS News.

Tom Gallagher, the CEO of Dairy Management, Inc., says milk needs a new marketing strategy and new packaging to keep it from being rendered obsolete. Without a more modern appeal, Gallagher says, "milk will get to the point that it really is irrelevant as a product."

Gallagher is pulling for new packaging, noting that kids have long struggled to open old-fashioned cardboard milk containers. The industry has recently launched a campaign to make milk more attractive that includes blended milk products in round, re-sealable containers.

A proponent of milk's health benefits, registered dietician Alissa Rumsey of New York Presbyterian Hospital, points out, "It's high in protein. It's a really good source of calcium and vitamin D."

But it's not the only source of these nutrients. Plant-based milks are often fortified with calcium and vitamin D. Take a look at the nutrition label to make sure. Hochberg also uses other dairy products to balance her kids' diets.