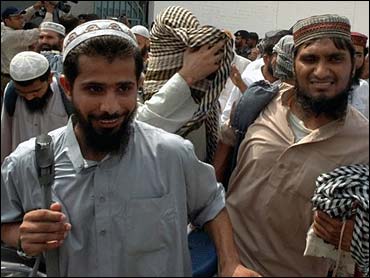 The men acknowledged that they were aware of the international furor caused by previous reports about Quran desecrations. Such reports triggered protests across the Islamic world and deadly riots in Afghanistan last month.

Seventeen Pakistanis were freed Monday from a jail in this eastern city, where they had been held since their release nine months ago from the U.S. prison for terror in Cuba. A Pakistani official said each had been "declared innocent by America" and cleared of involvement in terrorism by Pakistani intelligence.

The claims of the men, who spoke to reporters after joyful family reunions outside the jail in Lahore, could not be confirmed independently. The Associated Press briefly interviewed six of the men separately, sometimes interrupted by Pakistani officials who appeared anxious to keep the men from making the allegations.

All six said they were arrested in Afghanistan after going there to fight the U.S.-led coalition that ousted the hard-line Taliban regime in late 2001 for harboring Osama bin Laden and his al Qaeda network.

"During interrogation, whenever I would make a reference to the Quran they would hit me in the face with a copy (of it). They would tear it into pieces. They would tell me that Quran teaches us terrorism," said Salahuddin Ayubi, a 31-year-old from Rajanpur in eastern Pakistan.

"They would throw the Quran against the roof, which would tear it into pieces and they would say 'This is the real source of terrorism,"' Ayubi said. "This happened several times in my interrogation."

Hafiz Ahsan, a 26-year-old Lahore tailor who said he was arrested three years ago in southern Afghanistan during the "jihad" against America — claimed he saw interrogators stand on the Quran and throw the book in urine.

"Our interrogators would stand on the Quran and they would ask, 'Call your God and ask him to rescue you,"' he said. "They would throw Quran in a bucket of urine. They would tear the Quran and throw it at our faces. All this happened in front of our eyes. It was a routine."

He claimed inmates staged a hunger strike in protest, and were then tortured with electric shocks.

Also, a Russian formerly held at Guantanamo Bay said Tuesday that soldiers there regularly desecrated the Quran by putting it in a toilet.

"In Cuba, they used to throw the Quran in the toilet bowl. This happened regularly and was intended to provoke us," Airat Vakhitov said at a news conference.

Vakhitov is one of seven Russians who were released from Guantanamo in March 2004 and returned to Russia. He and the six others were held in Russia for three months, then released last June.

Lt. Cmdr. Flex Plexico, a Pentagon spokesman, said inmates at Guantanamo are treated humanely and there are "adequate standard operating procedures in place to ensure detainee religious faith is respected."

"That these detainees are now making allegations of abuse at Guantanamo seems to fit the standard operating procedure in al Qaeda training manuals," Plexico said.

A Pentagon report released this month confirmed five cases in which U.S. guards at Guantanamo mishandled the Quran, including incidents in which one copy of the book was splashed with urine and another was stepped on.

The report concluded that none of the guards flushed the Muslim holy book down the toilet — an explosive allegation that surfaced in a Newsweek magazine report. The magazine later retracted the report.

The freed detainees said they had learned about the controversy from other inmates and prison officials.

Many Pakistanis went to Afghanistan to fight alongside the Taliban, and scores ended up in Guantanamo. Pakistani officials say as many as 11 Pakistanis are among the 540 detainees still held. They say 67 Pakistanis have been freed from Guantanamo, and virtually all have been held in Pakistani custody since their return.

Tahir Ashrafi, a religious affairs adviser for Punjab province, said the 17 men had been cleared by Pakistani intelligence agencies after thorough interrogation and "have not been found to be involved in any kind of terrorist activity."

He said all the men signed statements saying they wouldn't join any anti-state activity.

However, one of the freed men, Khalil-ur Rahman, 21, from the eastern town of Gujrat, said he wouldn't hesitate to fight again. "If I get a chance to fight jihad again, I will definitely go. I will not miss it," he said.

Rahman claimed female interrogators at Guantanamo stripped in front of prisoners despite pleas for them not to — echoing allegations leveled by other inmates, although not by the other five inmates who spoke to AP on Monday.

Vakhitov said he previously had been held by U.S. forces at Kandahar in Afghanistan, where many detainees were held before being sent to Guantanamo, and that he also saw Quran desecration there.

"In Kandahar, they tore up copies of the Quran and even put it in a bucket of feces," he said.

"We would be made to be in a special investigative room where we would be handcuffed to the floor and then would be prevented from falling asleep by the playing of loud music, shining bright lights and so on. There was one program in which we would be moved from one cell to another every 15 minutes continually over a period of three or four months," he said.

He also claimed that forces used unspecified gas and one time allowed dogs to attack the prisoners.