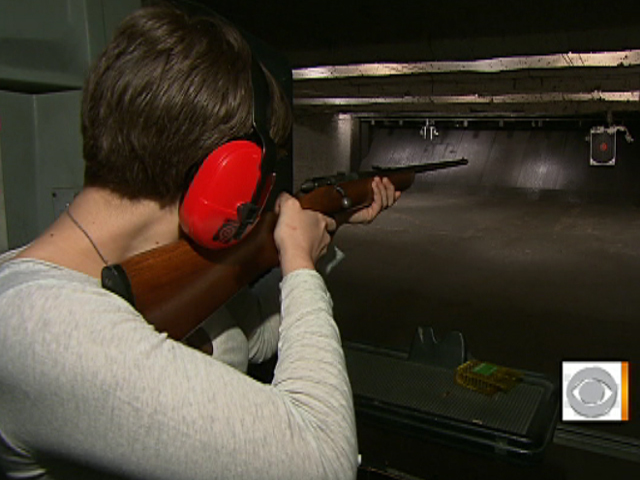 The face of the American gun owner is changing.

More women than ever are picking up rifles, shotguns, and handguns. And target shooting is one of the fastest-growing female sports.

Female participation in target shooting in the U.S. has nearly doubled in the last decade, growing to nearly five million women since 2001.

Pistol-shooting mommas and rifle-wielding yoga instructors may not be the type of woman who comes to mind when you hear about female shooters, but they're dominating the sport.

They say they shoot not only for self-protection, but because it relieves stress, helps them find peace and concentration and - feel feminine.

For instance, Deirdre Gailey, who says, "I'm a yoga instructor, I work at a vegan bakery -- and I also like to shoot guns."

Aren't guns and shooting the opposite of yoga's Zen experience?

"Yoga's Zen-like quality can be applied to shooting guns in a lot of ways,' says Gailey. "Shooting guns takes focus, concentration, and it doesn't always have to be about violence."

"(When I cook)," Gailey added, "I use a chef's knife. You have respect for a knife as a tool that you use in your craft. And I think guns can be used in the same way."

The target shooting industry now caters to female shooters. There are pink pistols, and even purses with holster slots.

"All of us are brought together by the love of the sport," says Lesa Ellanson, a certified shooting instructor for the National Rifle Association's "Women on Target" program.

To those who say guns are masculine, Ellanson says, "It would depend on how you define femininity. I think a capable woman is the most feminine expression of power that there is."

So women shooters could be "girly girls"?

"Very much so," Ellanson replied.

Jill Kargman, an author and mother of three, is a licensed gun owner and target shooter, says, "I always dress up. I'm very traditional feminine in certain ways. But when I'm shooting a gun, I guess I feel empowered, and empowerment is sexy."

Kargman's even been approved for a handgun license, a process that, in New York City, is one of the most rigorous in the country.

But Kargman says it was worth it. "Sometimes, you kind of lose yourself in motherhood. And as much as I'm obsessed with my kids,I started to feel like my identity was subsumed into being their mom instead of being Jill. And so I needed something that was my own. And shooting is that for me."

How does it feel shooting a gun?

Most states require training and safety courses before using firearms, and there are programs popping up throughout the country teaching women to do just that.

A majority also feel that the process of how to go about getting a vaccine hasn't been well-explained yet.

Jane Pauley talks with the vice president-elect and her husband about their marriage and blended family, and his role as the first "second gentleman."

Kamala Harris is "clear-eyed" about the job ahead: "It is not gonna be easy"

The former prosecutor, California attorney general, U.S. senator and soon-to-be vice president talks with Jane Pauley about her role in this unique moment in history, and looks back at the many "firsts" of her career.

GOP Congresswoman on voting to impeach Trump: "I felt like I had to"

In an unprecedented vote Donald Trump become the first president to be impeached twice; Jaime Herrera Beutler explains why she joined other Republicans in voting "yes."