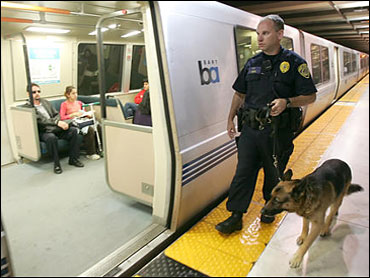 The agency responsible for transportation security has too few inspectors to make sure rail and mass transit employees are doing enough to guard against terrorists, a government report says.

The report by the Homeland Security Department's inspector general, due out Friday, says the Transportation Security Administration's request for 102 more inspectors is insufficient to get the job done right.

The review of TSA's inspection program, obtained by The Associated Press, was conducted between last year February and July.

These inspectors evaluate security risks and give advice to mass transit and freight rail operators. Soon they will be taking on more responsibilities, including enforcing regulations and monitoring federal grants.

The bottom-line, according to the inspector general, is that the program "appears understaffed for the long term."

Further, the Transportation Security Administration - established after the Sept. 11 terrorist attacks - focuses more on aviation security that on rail and transit, the report said. Inspectors for rail, transit and highway safety report to aviation security supervisors.

Intelligence officials have said that mass transit systems are vulnerable to terrorist attacks because the systems are open, easily accessible and have advertised schedules.

Homeland Security Secretary Janet Napolitano has acknowledged that TSA needs to do more to secure mass transit and subway systems. Shortly after she took over, she ordered a review of transportation security and whether resources are being used most efficiently.

A 2010 budget proposal issued by the White House on Thursday highlights transportation security as a funding priority but provided nothing specific on safety inspectors.