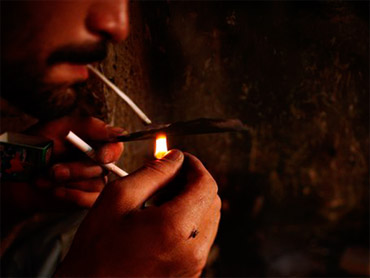 Use of opiate drugs such as heroin and opium has doubled in Afghanistan since 2005 - with nearly 3 percent of Afghan adults now addicted, according to a U.N. report released Monday.

The data suggest that even as the U.S. and its allies have poured billions into programs to try to wean the Afghan economy off of drug money, opium and heroin have become more entrenched in the lives of ordinary Afghans, creating yet another barrier to international efforts to knock out support for the trade that fuels the Taliban insurgency.

"The human face of Afghanistan's drug problem is not only seen on the streets of Moscow, London or Paris. It is in the eyes of its own citizens, dependent on a daily dose of opium and heroin above all - but also cannabis, painkillers and tranquilizers," said Antonio Maria Costa, executive director of the U.N. Office on Drugs and Crime.

Some Afghan addicts say they started using drugs to blunt the agonies of the grinding war. In some areas, users also give opium to their children to quiet them, the report says.

Afghanistan supplies 90 percent of the world's opium, the main ingredient in heroin, and is the global leader in hashish production. Drug crops have helped finance insurgents and encourage corruption - particularly the opium poppy crop in the south where the Taliban control cultivation and smuggling routes.

The Afghan government and its international backers have made a massive effort in recent years to discourage farmers from growing opium poppy, and its cultivation dropped 22 percent last year. Some of the drop is likely due to lower market prices, but the government has said it also shows that the Afghan war on drugs is having some success. Twenty of the country's 34 provinces were declared poppy-free in 2009.

Yet about 1 million Afghans - 8 percent of those between the ages of 15 and 64 - are regular drug users, and the use of opiates has spiked in recent years, according to the survey of 2,614 drug users throughout the country.

In 2005, 1.4 percent of the adult population were regular opiate abusers, the report said. But four years later, that number at almost 3 percent.

"We've never seen anything like this in the history anywhere across the world. So it is alarming," said Sarah Waller, who works on projects to reduce drug demand with the United Nations Office on Drugs and Crime, which published the report.

Half of adult drug users in the north and south of the country give opium to their children, the report said. The drug has long been used by Afghans to placate infants and young children.

At a drug treatment facility for women and children in Kabul, a few dozen women and their children are receiving treatment on any given day. The women wait on cots to see doctors and the children are cared for in a nursery where they spend the day coloring, playing and being tutored.

Nearly all of the children are also addicts, said Abdul Bair Ibrahimi, the coordinator for child care at Sanja Amaj Women's Treatment Center. There are a number of 5- and 4-year-old addicts. The youngest they had was a 1-month-old infant.

The Associated Press toured the center earlier this year and talked to a middle-aged woman who said she started using opium under the Taliban.

"I lost my brothers during the fighting and life was miserable. My brother-in-law used opium. He saw me crying and suggested I try it," said Shirin Gul. Then, two years ago, a nephew came to live at her house who was a heroin addict and she switched to the harder drug. She was at the treatment facility for the second time, having relapsed.

Her 15-year-old daughter, Gul Paris, was also being treated for heroin addiction. She said she started on the drug by stealing small amounts from her mother or brother.

"I didn't know if it was bad for me or not," the girl said, sitting barefoot on a bed, wearing a blue gown and a lavender headscarf. She relapsed two months ago, she said, after her brother started using again.

Treatment centers like Sanja Amaj are rare in Afghanistan. Only 10 percent of drug users surveyed had received any treatment, though 90 percent said they wanted treatment, according to the survey.

The increasing drug use has already had destabilizing effects on communities, according to community leaders interviewed for the study. They said drug use had increased insecurity, theft and violence in their areas.

It's unclear if the lower international price of opium in recent years has made dealers more likely push their product inside Afghanistan. U.S. drug czar Gil Kerlikowske, who toured the Sanja Amaj center in February.

"Clearly, this is an expanding addictive population here in this country. It really doesn't matter to a drug dealer that the people becoming addicted are poor," Kerlikowske said. "If they become addicted, they'll find ways to pay for that drug."